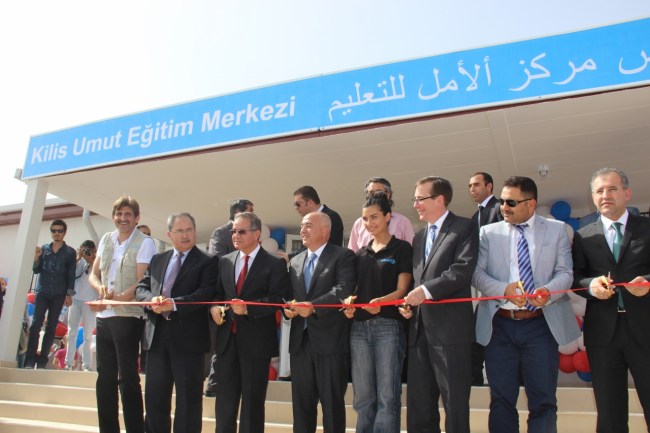 Kilis, Turkey – 4 June 2014 – Kilis has “one of the cleanest, most humane, most efficiently run refugee camps in history” It is also a busy city and no matter what time of day or night you walk its streets, you hear children speaking Arabic.

The city of 90,000 Turks hosts more than 100,000 Syrian refugees and 80% of them are living with their host community. The huge influx of Syrians settling outside camps last year increased the education needs.

In Kilis, today was time for celebration. Men, women and children gathered to inaugurate UNICEF’s new school, the first of 10 schools ready to welcome children outside the camps. UNICEF Goodwill Ambassador Tuba Büyüküstün, UNICEF Representative, Governor of Kilis, US Embassy Chargé d’Affaires and other officials lined up to cut the ribbon.

Until today, roughly 30% of Syrian children in host communities attend school in Turkey. Some of them enrolled in Turkish public schools, despite the language barrier. Some others attend one of 20 schools in the camps, which in many cases burdens families with transportation costs.

With funding from the Government of the United States and other donors, UNICEF is building schools in key locations, where Syrian refuges are most concentrated among the host community.

“In total, we aim to build 40 schools for next school year. Ten of them are ready and 13 others will be built during the next phase,” said Hande Dilaver, UNICEF Turkey’s Emergency Education Specialist.

Under Turkey’s Ministry of National Education supervision, the schools will teach a revised Syrian curriculum, by accredited Syrian teachers.

“For these schools, Syrian teachers are volunteering. They will be trained on how to work with war-affected children,” says Dilaver.

There are many informal schools in southern Turkey, run by Syrian volunteers. However, children achievements are not certified. The Ministry of National Education is mapping these schools and will evaluate them and eventually recognize those meeting the minimum standards.

“Children need quality education that gives them certificates. It is a guarantee to avoid a lost generation,” adds Dilaver.