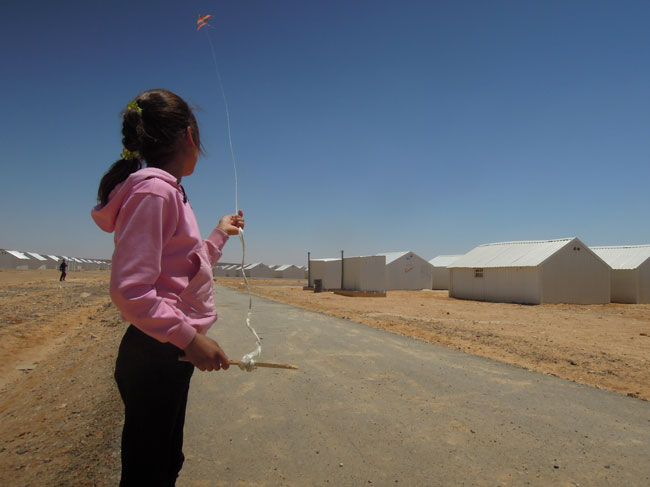 Shaima’a from Homs flies her kite above Azraq refugee camp.©UNICEF/Jordan-2014/Fricker

AZRAQ, Jordan, May 2014 – In the distance neat lines of white shelters appear on the landscape of Jordan’s barren eastern desert. This vast site is Azraq refugee camp that opened at the end of April. Built to house Syrians still fleeing the more than 3-year old conflict in their country, the camp now hosts some 6,000 people.

Abdu*, a father of four from Homs, stands outside his temporary home. He is eager to tell his family’s story and invites us in for Arabic coffee. Hospitality does not seem to stop even if you’re a refugee.

Crossing the border to safety

For three years the family has been on the move within Syria, desperate to find safe places to stay in their homeland. “But the situation was getting worse and worse so we had to leave,” says Abdu, “It was the last resort,” he adds.

Like the majority of the 6,000 Syrians who now live in Azraq their experiences represent the suffering of ordinary Syrians who are carrying the brunt of this war. 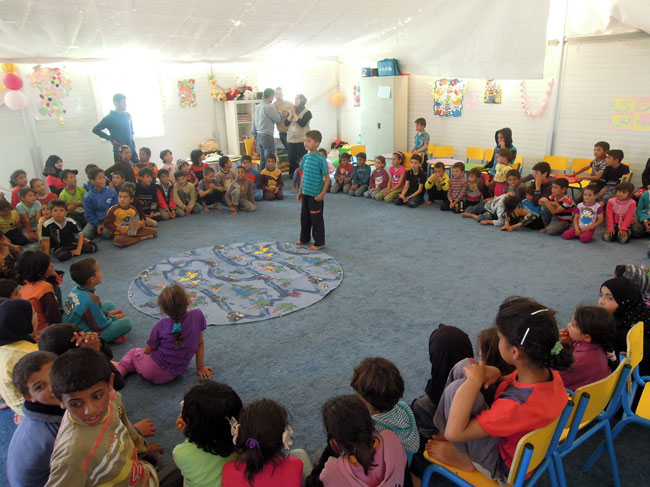 The family house was destroyed and Abdu’s brother killed. At 18 years of age his daughter Fatima has already lost a husband and daughter. Her three year old son now refers to granddad as ‘baba’ (Arabic for father).

Abdu’s other daughter Salma (15) has been out of school for more than a year and his 11 year old son, Mohammed, for six months. He’s one of the lucky ones. Walking along the lines of shelters it’s clear that half a year out of school is not much. Many children have lost out on three years of school.

Between the next row of homes humanitarian teams meet with families. UNICEF’s partners from the Norwegian Refugee Council, Relief International and Save the Children are encouraging parents and children to register at school.

There are two UNICEF supported schools in Azraq under the jurisdiction of Jordan’s Ministry of Education. Funding was received from the Government of Italy and the European Union. The first is open and has space for up to 5,000 boys and girls, including primary and secondary education.

But how do you get children who have missed so much school back to learning?

Informal and remedial education can be the answer according to Hind Omer, UNICEF Jordan Education Specialist. “We are working to fill a gap on what children lost to help them get back into the routine of learning,” says Omer. “After that if they feel they are ready the children can be reabsorbed into the formal system,” she adds.

A placement test helps children re-enter school at the relevant grade. Some 200 children are now attending informal classes at the school.

A safe place to play and heal

While education provides some normalcy to young lives, psychosocial support is also critical to help children move on from the horrors they have seen. At a UNICEF supported ‘child friendly center’ run by Mercy Corps, children participate in activities like building blocks, singing and drawing.

There are close to 100 children here. More parents arrive for the first time to take a look. The centre gives them the opportunity to leave their children in a safe and protective environment, while they continue to adjust to their new surroundings. 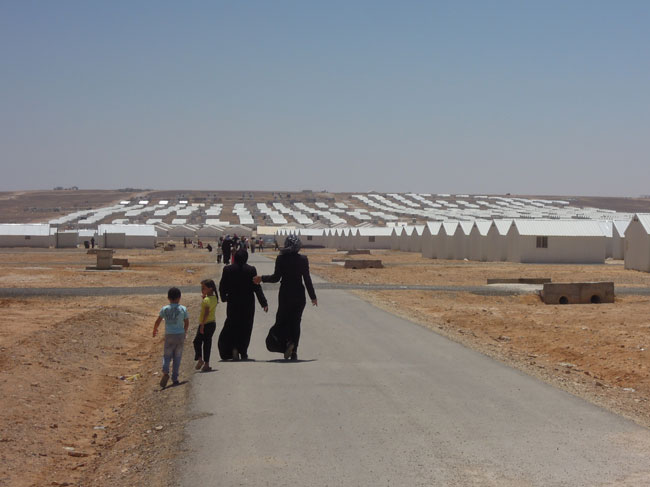 Abdu’s daughter, Fatima*, now volunteers at the centre. “I love children,” she says. Still a child herself despite what she has already lived through, the part-time role at least gives some hope for her future amid a life turned upside down.