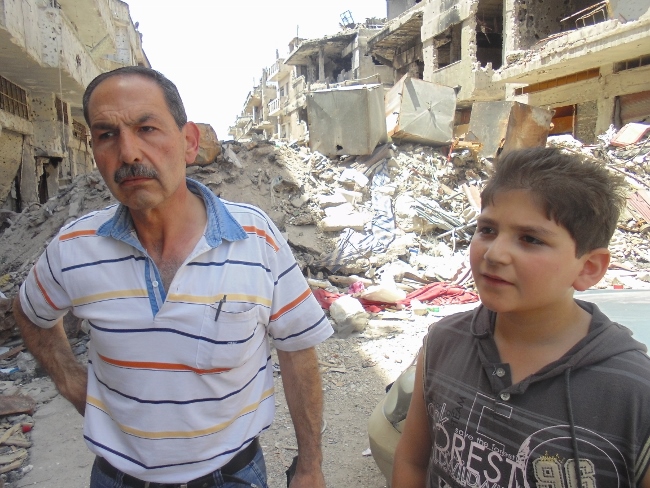 A father and son outside their destroyed home in the Old City of Homs. The family was displaced by fighting and have only been able to return recently with the cessation of hostilities in the area. © UNICEF/Syria-2014/Tiku.

Homs Old City, 26 May 2014 — I recently visited the Old City of Homs just days after the lifting of the siege and after nearly two years of intense military standoff.

The conflict saw hundreds of thousands of civilians uprooted from their homes in the Old City, while several thousand people remained trapped, caught between on-going fighting and subject to deprivations such as lack of food and medical supplies.

Little remains of the Old City and its 13 neighbourhoods, once a pulsating confluence of multiple ethnicities and religions. It was marked by grand and ancient mosques and churches where Muslims and Christians lived together for centuries.

Today, the skyline of the Old City is characterised by slanted, half-falling, severely bombed out rumps of buildings. Schools, hospitals, shops, houses, churches, mosques, and sport facilities – even the lone newspaper office – have all fallen like a pack of cards. What remains are literally part rubble, part raggedy structures. Those buildings that remain upright are full of shell holes and riddled with holes from machine gun fire. Amid the rubble and ruins is unexploded ordnance and other explosive remnants of war.

I spent five hours in the Old City talking to civilians who had returned to visit their former homes and businesses. It’s not possible to live here yet. Piped water systems, for example, lie completely damaged. Mounds of rubble, extensive water logging in several places and toxic dust from explosives is everywhere, making the area a potential health hazard. At night, the entire Old City is in darkness, cut off from the electricity system.

For me it was a gut-wrenching and heart-breaking experience to witness a once thriving community that had been turned into a war zone and the lives of thousands of people devastated.

I saw a boy Raed barely in his early teens, remorselessly digging with his small hands through a pile of rubbish strewn on a street corner. He neatly piled up bits of metal and plastic which he would sell to traders of household junk. The boy told me he needed the money to buy bread for his family. For Raed, going to school was a distant memory.

I met Reema, a girl of about 16 who stayed home for two years, trying to stay safe from the conflict raging around her. She was injured by shrapnel that left her with a permanent limp. 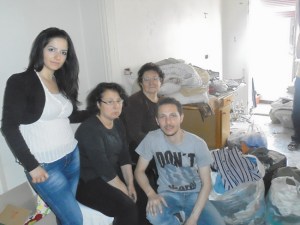 A family visits the remains of their home in the Old city of Homs. It will not be possible for displaced families like this to return permanently until vital infrastructure is restored and unexploded ordnance is cleared away. ©UNICEF/Syria-2014/Tiku.

I ran into Suad, a young mother and widow – her husband having died from a stroke – who surveyed the aftermath of arson and looting: the merciless desecration of her home and possessions. Her eyes sad and face ashen, unable to put her feelings into words.

A diminutive and emaciated middle-aged man who lived through the siege told me that he was reduced to eating wild leaves for breakfast, lunch and dinner. He saw his weight drop from 87 kg to 43 kg as a result of prolonged starvation. Neither religion nor revolution justifies breaking into people’s homes and turning them into ashes, he said.

A highly-regarded neurosurgeon found his private clinic – once a thriving practice — and residence in the Old City burned and in a shambles.

A priest, at a revered Orthodox church, which has been derelict for years, busied himself with the urgent task of rehabilitating the church-run orphanage. As the conflict continues to take its toll on millions of people, more and more children are becoming orphans, in urgent need of care and support, the priest told me.

These are just some of the impressions that stayed with me as I returned from the ravaged Old City, whose destruction has taken a terrible toll on civilians, particularly children and women. One of the pivotal scenes of the raging Syrian conflict, today the Old City resembles a surreal Hollywood set from a war movie.

UNICEF is providing humanitarian assistance to millions of conflict-affected children and families in Syria, including through support for safe drinking water and to the on-going polio campaign. It is essential that life-saving assistance reaches all those affected by the conflict, particularly children and women, no matter where they are in the country.

UNICEF’s emergency assistance is desperately underfunded, with around US$47.6 million (or just over 21 per cent) of the needed US$222 million for 2014 having been so far received.