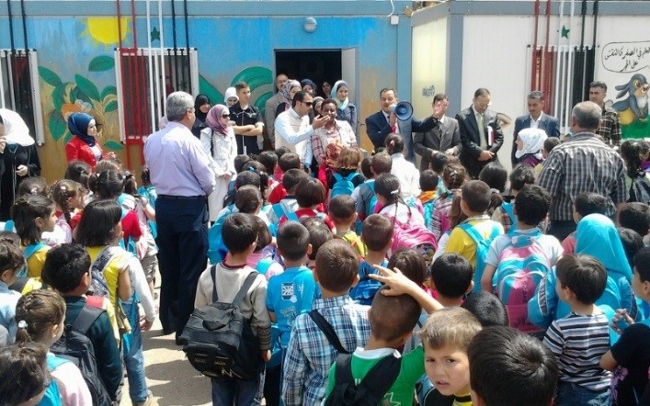 Children gather in the yard of a UNICEF-supported school at the university shelter for displaced families in Aleppo. ©UNICEF/Syria-2014/Dukmak

There were 29 of us, part of one large UN mission to Aleppo. This was the first UN-wide mission to a part of the country that has seen more than 1.25 million people affected as a result of intense conflict that refuses to end. The fighting takes place less than three kilometers from the city. We could hear the sound of explosions day and night.

The mission aimed to negotiate access – in particular to the very hard-to-reach areas across the shifting frontline – and follow up on the UN’s on-going emergency programmes. We also worked on establishing a permanent UN presence in the city.

All the way from Damascus to Aleppo, throughout the 450 kilometres, I came across so many children carrying UNICEF school bags.  In the middle of an ongoing civil-war that scene filled my heart with hope.

During my visit to the UNICEF-supported Basic Education School for displaced grade 1 to 4 children at the Aleppo University I met a number of confident, upbeat children, not shy to ask tough questions. In the back row, however, there was one child I noticed. He looked withdrawn and reluctant to speak. His thoughts perhaps focused on the shelling that could be clearly heard in the distance

As a mother, I could not hold back my tears when a young girl got up and asked me: “When will this war end?” I saw my own daughter in that girl, grappling with the uncertainties of a raging conflict, not knowing when she can expect to have a normal life. I did not have an answer. Another girl announced she would study to become an engineer so that she can rebuild her shattered country. 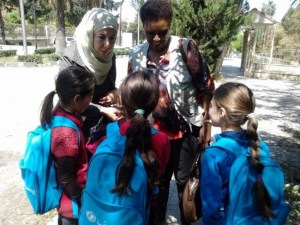 A UNICEF colleague and I talk with school children in Aleppo. © UNICEF/Syria-2014/Dukmak

While I was in Aleppo, the UN Humanitarian Coordinator met and negotiated for access to certain areas. This access is vital to reach conflict-affected children and families with the much needed humanitarian assistance.

Despite severe challenges, UNICEF facilitators on the ground vastly helped in Aleppo by pushing determinedly for emergency programmes. These include water and sanitation, health and nutrition, and education which are to be delivered where needed most.

For example, UNICEF provides purification material and generators to the water system, in support of access to safe water. UNICEF’s health team supports the on-going polio campaign for children under the age of 5. Despite what has been achieved so far, it is clear that more humanitarian assistance is needed all over Aleppo

Protection of children is a significant issue for UNICEF’s work in Aleppo. Apart from the psychosocial impact on children, there is an increase in the number of children living and working on the streets. They are at greater risk of exploitation and need protection.

The security situation throughout the mission was tense, making it difficult for us to move freely. During the better parts of the mission, the supply routes into Aleppo remained blocked causing acute shortages of essential commodities even in parts of the city that remain relatively accessible. On our way back to Damascus, we saw a line of trucks carrying food and gasoline worming its way through a detour into Aleppo. A sign of relief for a population that has learned to survive and hold on to dear life on a hope and a prayer.