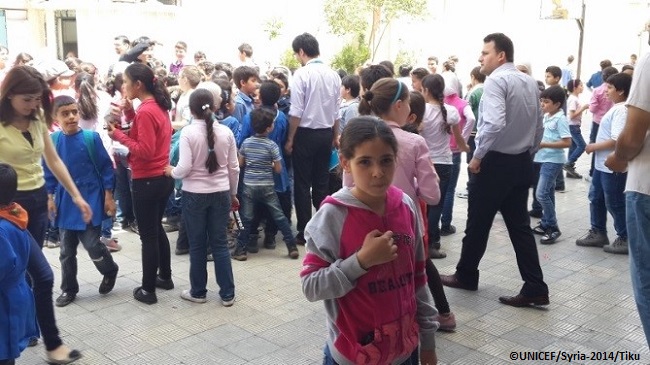 Children gather during lunch break in the school courtyard that has been the scene of shelling in the past. ©UNICEF/Syria-2014/Kumar Tiku

Damascus, 14 May 2014 — Early in 2013, 1,200 students attended a primary school in central Damascus.  Then one day, a shell exploded near the school.  The children had a narrow escape, but almost overnight school attendance dropped to just 400.

This is just one of many schools and it highlights the level of fear that runs through the hearts and minds of children and their families in Syria today.

Although attendance in the school has since increased to 900, fear remains. Afaf, a counsellor at the school says: “We are seeing more children wetting their pants at school, a sign that they are afraid and nervous. They get especially scared when they hear the terrible sounds of shells”.

Samer (12), lost one year of schooling because of constant disruption and displacement.  He says he can tell if shelling is close or far: “I learnt it first when the shell landed on the top floor of our house near Harasta (Rural Damascus). We left the house the same day.  As we started walking, another shell landed in our neighbourhood. Afterwards, we heard that another shell landed on our house”.

Sabeen (10) says she left her family house in A’dra also in rural Damascus when it was hit by shells. “A lot of glass panes broke but no one was injured.  We huddled close to my dad and cried. Dad tried to calm us down.” After a few days they left for Damascus.

“Children are trying to cope with the violence” says Afaf. “When they play it is mostly acting out clashes, fighting and beating each other up”. Afaf tells us about Rami (10) who carried a knife to school. Rami would not let go of the knife saying it was for self-protection.

“His parents were not even aware that Rami had hid the knife in his bag. It took a number of sessions to make him feel a bit more reassured and overcome some of his fears”.

“Children across Syria are enduring violence and traumatic events on a regular basis,” says Insaf Nizam, UNICEF Syria Chief of Child Protection. “Many children have witnessed things that no child should experience. The conflict is taking a very real physical and emotional toll on children and their future development.” 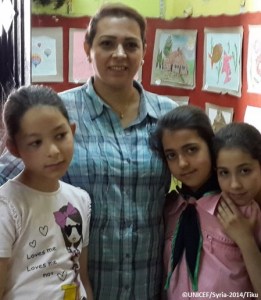 The on-going conflict has severely affected school attendance, with an estimated one million children out of school inside Syria.

Whilst the national average attendance rate stands at 73 per cent, it is as low as 50 per cent in Aleppo, and 54 per cent in Deir ez Zour where the conflict is heaviest.

Another one million children, although registered in schools, are at risk of dropping out because they are not able to go to school on a regular basis. Some have already lost two three years of schooling.

Afaf says access to recreational activities helps to channel children’s energy and thoughts in a positive direction: “Children love activities that allow them to work together and enjoy the experience of creative thinking.”

*Names changed for this story