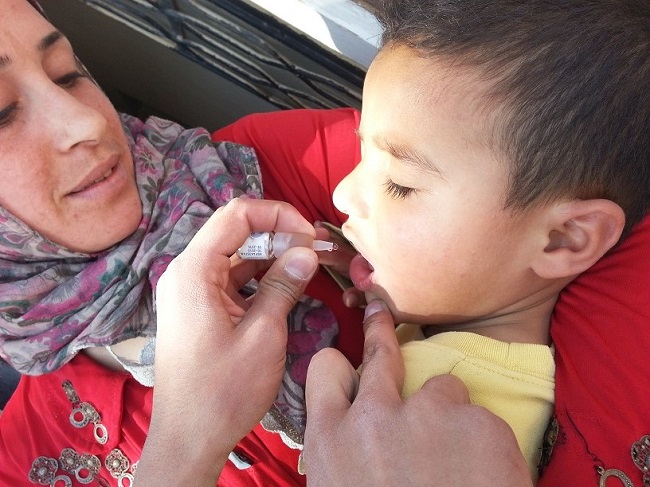 A mother watches her baby boy receive polio drops during an immunization campaign supported by UNICEF and ECHO in Deir Ezzor, Syria ©UNICEF/Syria-2014/Najem

Deir Ezzor- Damascus, 7 May 2014: Vaccination teams are braving intense fighting in Syria’s north-eastern province of Deir Ezzor amid ongoing efforts to protect children against the crippling polio virus following an outbreak of the disease in the same area last year.

According to independent monitoring reports, while an immunization round in April succeeded in vaccinating 294,000 children aged under five in Deir Ezzor, an ongoing campaign this month is not achieving similar results. Health experts say multiple vaccine doses are necessary to fully protect young children against the highly infectious polio virus.

Speaking from Syria, UNICEF health facilitator, Dr. Suliman Najem said that reaching remote communities is particularly challenging in a region that has been badly affected by the three-year old conflict.

“Crossing the Euphrates is one major challenge we have faced since an air-strike in May last year destroyed an important bridge across the river,” said Dr. Najem. “Now, together with two or three volunteers, we have to take a boat so as to reach some more remote communities on the other side. The risk is not the river, the risk is the fighting and the bombing,” he added.

Earlier this week, the World Health Organization (WHO) declared the recent international spread of wild poliovirus — including to Syria and Iraq —  “a public health emergency of international concern”. Syria’s first polio case in fourteen years was discovered in Al-Mayadeen district of Deir Ezzor in October last year. The province now has 18 out of 27 polio cases in Syria confirmed by WHO.

“Fighting is ongoing and we cannot reach many villages,” said Dr. Najem. Some villages like Khasham, Dahla and Basira, north of the Euphrates, were not reached in the April round either”.

As a result of the recent fighting, some 60,000 people were reported this week to have fled towns in Deir Ezzor. UNICEF estimates that at least half of those who fled are children.

So far, with the support of donors including the State of Kuwait, UNICEF and WHO have supported five nation-wide polio vaccination rounds, with a particular focus on reaching children living in areas under siege or other hard-to-reach parts of the country. The sixth round, which was launched early this week, aims at immunizing 2.91 million children across the country.

UNICEF supports local communities and NGOs in Deir Ezzor in their efforts to immunize children.

“Young people are the most active members of our campaign,” Dr. Najem said. “My two daughters are now working as vaccinators. I am so proud of them”.

The re-emergence of polio in the region means parents are desperate to have their children immunized.

“When we go to remote areas, families welcome us with tea and sweets,” said Rana, a female polio volunteer. “People are really scared that their loved ones could become infected with polio”. 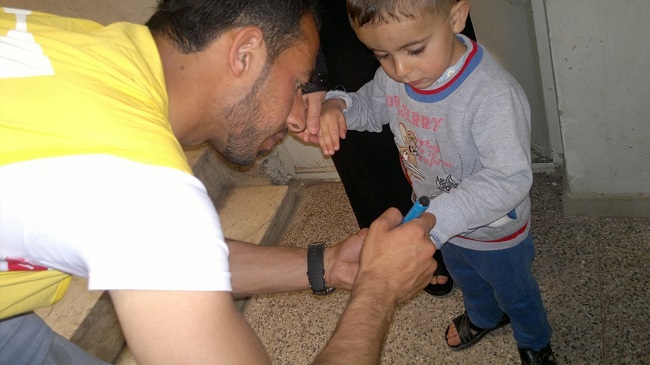 A polio volunteer in Deir Ezzor marks the finger of a two year old child who has just received vaccine drops as part of an ongoing immunization campaign in the area. ©UNICEF/Syria-2014/Najem