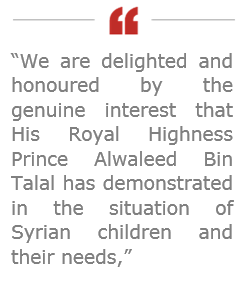 supported Education, Health and Psychological programmes for Syrian refugees in Za’atari camp in Jordan. His visit on Tuesday included a meeting with Syrian families, children and adolescents impacted by the ongoing conflict.

UNICEF estimates that there are currently some 320,000 Syrian children living as refugees in Jordan, including at least 50,000 in Za’tari camp.

“We are delighted and honoured by the genuine interest that His Royal Highness Prince Alwaleed Bin Talal has demonstrated in the situation of Syrian children and their needs,” said Maria Calivis, UNICEF Regional Director for the Middle East and North Africa.

In 2014, UNICEF is strengthening and expanding its child protection and education programmes in Syria and neighbouring countries, with the aim of enhancing the quality of learning in public schools, increasing access to remedial and catch-up learning opportunities and supporting the continued ability of Syrian children to return to school.

HRH Prince Alwaleed has been providing continuous support to UNICEF’s global efforts for the Syria crisis, as well as for its programmes in Yemen and the Philippines.

UNICEF works in more than 190 countries and territories to help children survive and thrive, from early childhood through adolescence. The world’s largest provider of vaccines for developing countries, UNICEF supports child health and nutrition, good water and sanitation, quality basic education for all boys and girls, and the protection of children from violence, exploitation, and AIDS. UNICEF is funded entirely by the voluntary contributions of individuals, businesses, foundations and governments. For more information about UNICEF and its work visit: www.unicef.org