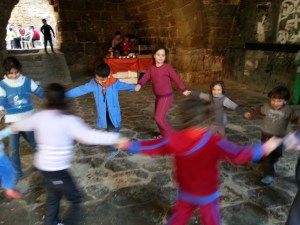 Children dance in an open space at the Old City shelter for displaced families in Tartous. © UNICEF Syria/2014/David Youngmeyer

Tartous, 13 April 2014 – Millions of Syrian children and their families have been displaced from their homes by the on-going conflict. Many are living in shelters set up in public buildings such as schools, or in unfinished apartment blocks.

In the west of Syria, almost 1.3 million people are displaced in the three governorates of Tartous, Lattakia and Idleb. Tartous hosts the largest number with close to 570,000.

In the city of Tartous, a bustling port relatively distant from the fighting, thousands of displaced families live in 22 shelters or with the host community, taking refuge with family and friends.
UNICEF, part of a UN hub in the city, works with partners to support the most vulnerable children and families.

I accompanied colleagues to a shelter in the historic centre of Tartous, near an ancient fortress and a 12th century structure, which houses a museum.

The shelter has been set up in the vaulted basement of one of the old stone buildings and has the feeling of a huge dark cellar.

Around 20 families, including 38 children, live here in tents with a hope to get some privacy away from the crowded conditions. Within each tent they create something akin to home using whatever small comforts they can find like a rug or a blanket to soften the stone floor. 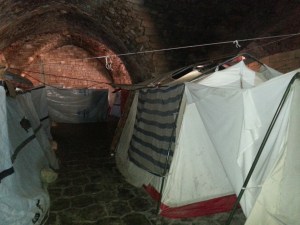 Set up in mid-2011, shortly after the crisis began, the shelter is one of the first in Tartous, with most families coming from Aleppo and Homs.

A hygiene promotion and awareness session for mothers and adolescent girls, led by volunteers from UNICEF partner the Syrian Arab Red Crescent (SARC), has just finished. Families with infants have received baby hygiene kits, including diapers, rash cream and soap. One of the volunteers tells me that the session covered topics such as personal hygiene, how to manage diarrhea and the importance of hand washing and covering food. The session also focused on prevention of waterborne diseases, which can spread quickly in crowded conditions.

I spoke with Boushra,* a mother living at the shelter with her family, who fled Aleppo nearly two years ago when shelling damaged their home. Her three youngest children all missed around a year of their education because of the displacement.

Boushra is pleased that her two youngest attend school regularly now, but is worried about Shadi her 16-year-old son who never returned to school. He sells gas bottles for a living.

“We want him to go back to school and he wants to go back, but he also needs to support the family,” she says. Boushra’s husband has a job, but the family rely heavily on what they’re given at the shelter.

Boushra is one of many millions of Syrians in need that UNICEF is working to help, providing life-saving supplies including much needed vaccines and water and sanitation services. . We’re also working to put children like Shadi back into school and help the many traumatised children recover from what they’ve witnessed and reconnect with their childhood.

But we’re concerned about the little funding we’ve received to be able to continue these activities. Of the $US 222 million required by UNICEF in Syria in 2014, we still urgently need $US 200.

You can donate to our Children of Syria appeal to support our work in Syria and the region here.

* Name has been changed.