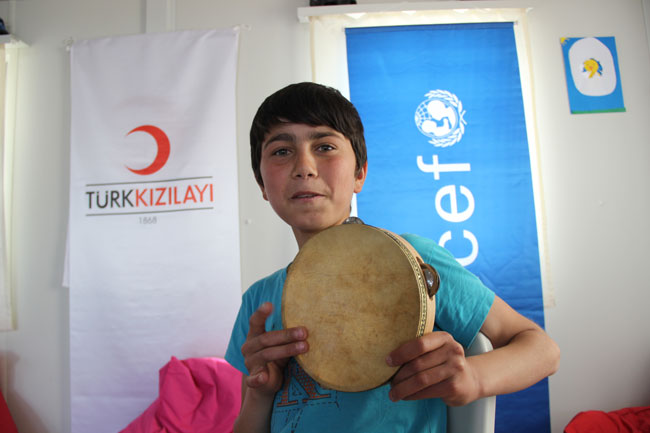 14-year-old Bilal with his tambourine. © UNICEF/Turkey-2014/Yurtsever

ADANA, Turkey, April 2014 – Youth worker Sevgi Biçer first noticed the boy at the opening of Adana Sarıçam Camp’s Child Friendly Space. “He was serious and aggressive, like an adult,” she said. “The other children were painting fabric, while he just walked around, watching.”

But now things are different. Music has helped Bilal, a 14-year-old from rural Idlib, come out of his shell. With time, he’s started to join in group activities and laugh and joke with the others. He has learned how to play the guitar and also plays the tambourine. Despite being unfamiliar with Turkish singers and lyrics, he loves to play and listen to the music of his host country. When he speaks, it’s clear that music and the other activities in the Child Friendly Space has helped to bring the child in him back.

Bilal arrived in Turkey with his family 15 months ago after a difficult journey — they had to cross the Orontes River to avoid the clashes between the two sides. Arriving in Nizip Camp, they then relocated to Adana. But Bilal’s father, a teacher, and his mother have stayed in Syria — Bilal lives in the camp with his six brothers and sisters.

His previous life in Syria was spent playing football and riding his bicycle. He’s had to leave all that behind and misses his life there terribly. “I miss my mother and father. We used to play with my brothers and sisters. I miss those days so much. I miss my teachers and friends as well. I miss Muhammed and Mustafa the most.” 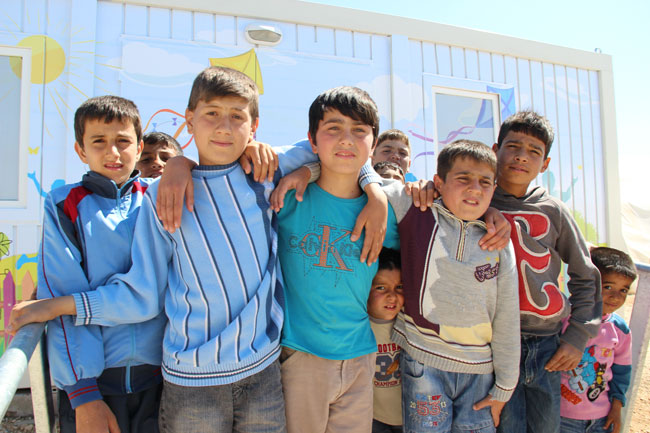 Bilal is already taking a leading role with other children at the camp. “I keep an eye on the little kids,” he says. © UNICEF/Turkey-2014/Yurtsever

Youth workers like Sevgi are trying to provide students between the ages of 14 and 18 with leadership skills for the future. Many of the students are like Bilal and have been separated from their parents by the conflict. According to Sevgi, the leadership training has made a huge difference to Bilal: “As a Leader Student now, he guides other students who are younger than him.”

“I keep an eye on the little kids,” says Bilal. “I make sure they don’t make too much noise. My favourite activities are music, art, printing, draughts and ping-pong.”

And Bilal wants to follow in his father’s footsteps — as long as he has time for his other passion. “I want to be a teacher in the future, but I also want to be much more involved in music if possible,” he says.