Rural Damascus, 7 April 2014 – “One drop, two drops,” a mother counts along with a health worker at Dahiet Qudsaya health centre in Rural Damascus. Her three-year-old daughter cries at the unusual taste of the polio vaccine in her mouth, but the mother calms her down: “Now you will grow up healthy.” 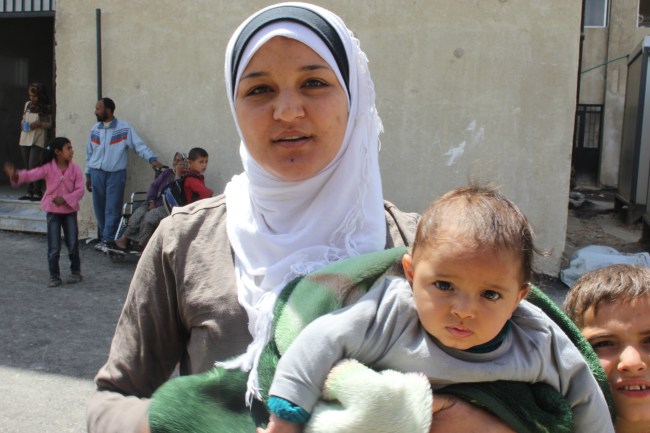 A mother with her baby girl, who’s just received her two polio drops for the April vaccination round. With many families forced to flee their homes to Qudsaya region, the area is now estimated to host more than 32,000 children under five. © UNICEF Syria/2014/Razan Rashidi

More than six months after confirmation of the first polio case in Syria, UNICEF continues to support efforts to tackle the outbreak in all parts of the country. The April nationwide polio round which started this week aims to reach 2.8 million children across Syria with a special focus on hard-to-reach children in conflict zones and besieged areas. It is essential that all children are vaccinated; of the 26 confirmed polio cases in five different Syrian governorates, nearly all had not been vaccinated at all or had not participated in enough rounds of the vaccine, according to UNICEF and the Syrian Ministry of Health.

Abu Adham, a father at the same health centre, queues with his three-year-old son and baby daughter. “We fled Erbeen, Rural Damascus, right before a military operation two years ago,” says Abu Adham. Pointing at the baby girl in his arms he says: “We had our second child here.”

To improve access, UNICEF is supporting local NGOs and the Syrian Arab Red Crescent. In Qudsaya city, for example, which has been sealed off for more than a month, local youth volunteers from Child Rights Society (CRS) are helping out. “We ride a bus and I use a loud speaker, calling parents to bring their under five children for the polio drops,” says a CRS volunteer. 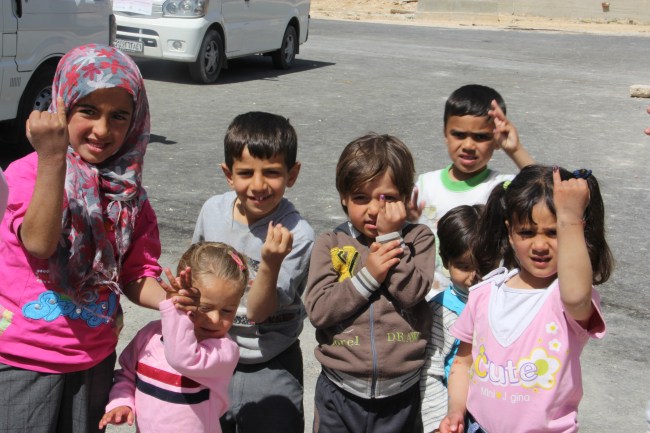 Children showing off the marks on their fingers that prove they’ve been vaccinated against polio at a shelter for displaced people in Rural Damascus. A UNICEF-supported mobile health team visited the shelter and ensured all children got the vaccine. © UNICEF Syria/2014/Razan Rashidi

Last month, more than 75,000 children were vaccinated in areas which were previously classified as inaccessible. “Some parents were totally unaware of the outbreak and the vital need for vaccination,” says another volunteer vaccinator. “The use of mosques to announce the campaign proved to be useful.” UNICEF is supporting a national communication plan to raise awareness of the campaign among parents.

“It is very positive to see an increase in the number of vaccinated children across Syria,” says Youssouf Abdel-Jelili, UNICEF Representative in Syria.  “There is still work to be done to reach every child.”

It is estimated that 104,000 children have not been vaccinated in any of the five rounds to date, mainly in East and West Ghouta areas of Rural Damascus Governorate, including parts of Douma district and some villages in Zabadani district.

The support of many donors, including the Governments of Germany and Kuwait, the UK Department for International Development (DFID), and  European Commission – Humanitarian Aid and Civil protection (ECHO), has been vital. UNICEF has provided the Ministry of Health with 15 million doses of polio vaccine in support of the campaign, and placed an order for an additional three million to cover the May round.