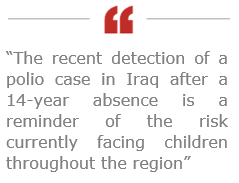 aiming to reach more than 20 million children over the next five days.

For Iraq, this will be the first nationwide vaccination campaign since a case of polio was confirmed by the Ministry of Health on 30 March in a six-month-old boy from Rusafa, northern Baghdad.

“The recent detection of a polio case in Iraq after a 14-year absence is a reminder of the risk currently facing children throughout the region,” said Maria Calivis, UNICEF Regional Director for the Middle East and North Africa. “It is now even more imperative to boost routine immunisations to reach every child multiple times and do whatever we can to vaccinate children we could not reach in previous rounds. That’s the only way we will prevent this outbreak from spreading further.”

The current vaccination rounds are part of a comprehensive response to the announcement, in October 2013, that wild poliovirus of Pakistani origin had found its way to Syria. In recognition of the risk of further international spread, the governments of seven countries across the Middle East, with the assistance of local non-governmental organizations, civil society groups and UN agencies, are endeavouring to reach 22 million children multiple times with polio vaccine. Since October 2013, 25 polio vaccination campaigns were completed across the region, including five rounds in Syria and six in Iraq. 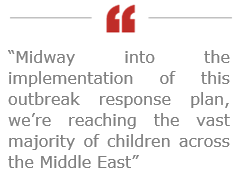 The numbers of children being vaccinated in each round is rising; however, the outbreak response is yet to reach especially vulnerable groups such as children who are on the move fleeing violence from Syria or those living in the midst of active conflict.

“Midway into the implementation of this outbreak response plan, we’re reaching the vast majority of children across the Middle East,” said Chris Maher, WHO Manager for Polio Eradication and Emergency Support. “In the second phase of the outbreak response we must work with local partners to reach the hardest-to-reach – those pockets of children who continue to miss out, especially in Syria’s besieged and conflict areas and in remote areas of Iraq. We won’t stop until we reach them.”

Health teams in Lebanon and Turkey will also join the campaign on 10 and 18 April.

Since the outbreak was announced UNICEF has delivered 14 million doses of polio vaccines to Syria.

As of end of March 2014, 27 children have been paralyzed by polio in Syria: 18 of these children are in the contested governorate of Deir Ez Zour, four are in Aleppo, two in Idlib, two in Al-Hassakeh and one in Hama. Prior to this outbreak, no polio cases have been recorded in Syria since 1999. The risk of spread to countries in the region and beyond is considered high, and health authorities from 21 countries have declared a public health emergency. Further polio immunization campaigns will be repeated across the region. In Syria, they will be carried out at monthly intervals until at least May 2014.

On 30 March 2014, the Iraqi Ministry of Health declared a polio outbreak when one case of polio was detected in a child in the Al-Rusafa area in the capital Baghdad.

Genetically-related polioviruses, which originated in Pakistan, have also been detected in sewage samples in Egypt in December 2012, and in Israel and the West Bank and Gaza Strip in 2013.

Inside Syria over the past years since the conflict erupted in 2011, immunization activities have been significantly constrained by the violence and access restrictions. Cold chain equipment in a number of districts has been lost and mobile health teams have not been able to perform regular visits. This has led to missing out on vaccinating between 500,000-700,000 children in these areas.