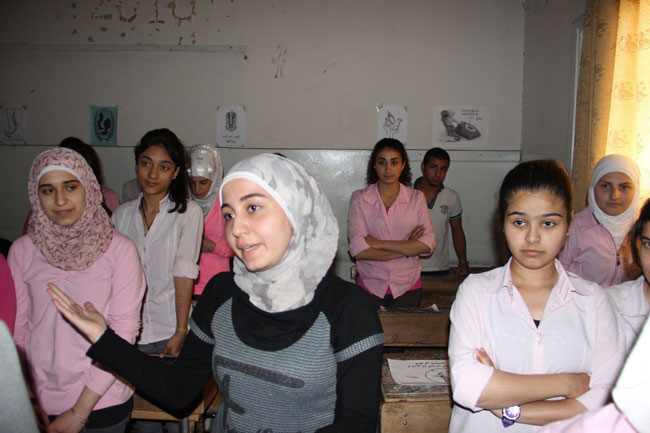 A student at the Al Adawi School in Damascus responds to a teacher’s question on explosive remnants of war. © UNICEF/Syria-2014/Tiku

Damascus, Syria, April 2014 – “Always keep an eye out for signs and clues that suggest the presence of explosive remnants in your neighbourhood,” says Nahid, the sports teacher at Al Adawi Al Mohadatha School in central Damascus. A class of twenty high-school girls listen attentively as Nahid describes the various forms of explosives and unexploded ammunition that children must be aware of, in order to stay safe.

Nahid is among the first group of school teachers from four governorates to complete the UNICEF-supported four-day training on Risk Education. She says, “I will waste no time training my students on how to stay safe. These children are exposed to explosives and explosions all the time.”

In response to the need for a comprehensive risk education programme in Syria, UNICEF with 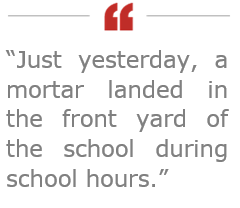 financial support from the Spanish Fund for UNICEF, and in collaboration with the Ministry of Education and non-governmental partners, developed a risk education and enhanced psychosocial support programme to reach 200,000 children in schools, school clubs and child friendly spaces attached to schools.

The objective is to provide Risk Education to children through the school system by establishing a core group of Master Trainers at national and governorate levels. The support covers training of teachers, developing Risk Education materials including a Teachers’ Kit, and linking Risk Education activities to enhance psychosocial support in child friendly spaces attached to schools.

Rihab, the school head teacher, says she is happy that her school is one of the first in Damascus to get started on the special class on risk education. The neighbourhood around the school sees regular shelling. At least twice a week, mortars land in various parts of the neighbourhood. She says, “Just yesterday, a mortar landed in the front yard of the school during school hours.” 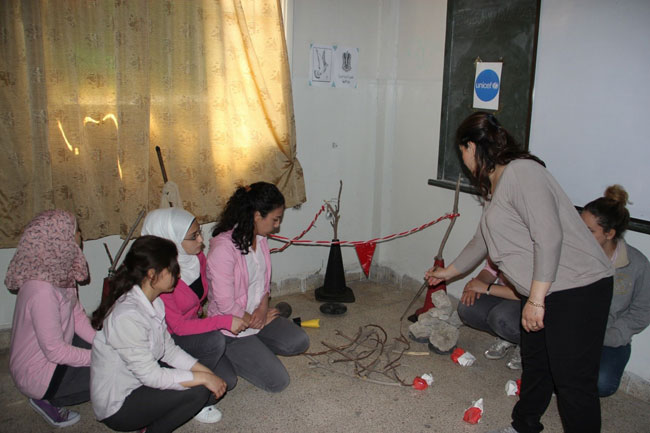 Students watch a simulation exercise on signs and clues for unexploded ordnance. © UNICEF/Syria-2014/Tiku

During a six month period, each of the 55 Master Trainers will be responsible for training 300 teachers in batches of 30-45 participants.

As part of the campaign, UNICEF will work with non-governmental organizations in widening dissemination of self-learning material such as posters and leaflets on the risks of Explosive Remnants of War (ERW) to children and communities in hard-to-reach areas of the country.

In a country devastated by intense conflict during the last three years, children are constantly exposed to the horrors of war. Nahid says even though ‘danger’ signs have been put up by the authorities at several prominent places in Damascus to help citizens identify potential hazards such as unexploded ordnance, there is no awareness about what these signs mean.

Using a combination of training tools including power-point slides and pictures plastered on the walls of the class room, the students are given a graphic tour of the explosives that they must avoid.

Manal, a grade 11 student, found the information beneficial in understanding how to keep herself and others safe. She says, “One of the things we learned was how to relate to a suspicious object. I should put a sign next to the object to warn others about not touching the object, before I report the object to the authorities on a helpline.”

*Names of students have been changed to protect identity.