Amman, Jordan, 31 March 2014 – “Please ma’am, can I share with you my story?” Seven year-old Ahmad (name changed) said with a very shy face. We were on a visit to a school in Jordan’s capital, Amman. It was the afternoon shift for Syrian students. “Yes, of course you can,” I replied immediatel 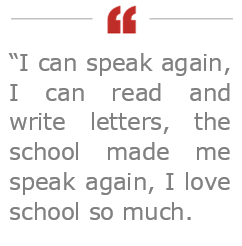 As an interpreter working with UNICEF Jordan, I travel across the country with my colleagues, responding to the Syrian refugee crisis. Through my work I hear many stories. Ahmad’s stayed in my mind.

“The soldiers broke into our house. They grabbed Baba (father) and started beating him with their guns. I saw blood come out of his face,” he whispered to me. “I screamed the loudest I could at them, to let him go. It was in vain. Mum said that he was arrested, but I didn’t know what that meant. I just know that they took him far away. I couldn’t speak from that time, I lost my voice,” he was holding back his tears.

Ahmad eventually made it to safety in Jordan. He is now one of the more than 100,000 Syrian children who have registered at schools across the country. “I can speak again, I can read and write letters. The school made me speak again, I love school so much. The teachers and the principle are so kind to me. They told me that I can read stories for my dad when he is back,” Ahmad said with a smile on his face.

He wanted to tell me this because he knows that his school is supported by UNICEF. For me, Ahmad‘s story clearly highlights the importance of school, not just as a place of learning but one of healing. 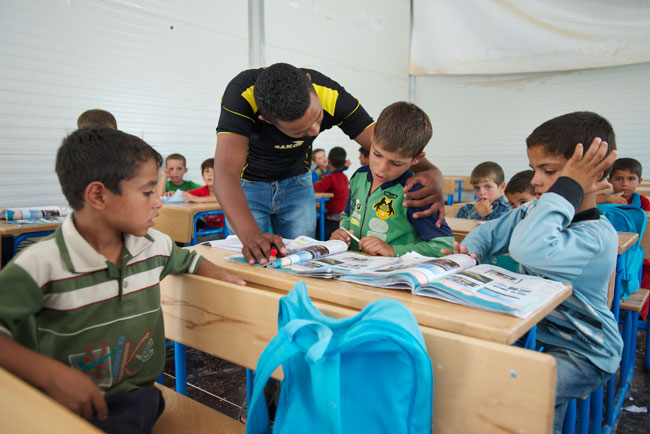 Teacher helps a boy during a Grade 1 science class in a UNICEF-supported school in Za’atari camp for Syrian refugees in Jordan. © UNICEF/NYHQ2013-0562/Noorani

In Jordan, UNICEF works with the Ministry of Education in managing double shifted schools, where Jordanian children study in the morning, and Syrians in the afternoon. This increases the capacity of schools in areas where large numbers of Syrian refugees live, and provides learning opportunities for children desperate to continue their education.