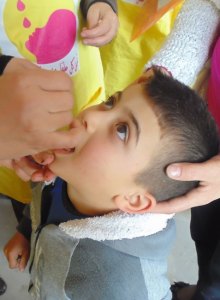 A boy receives his polio vaccine at a health centre in Safita, Tartous Governorate as part of the March polio round in Syria. © UNICEF/Syria-2014/Ibrahim

Damascus, 26 March 2014 – Close to three million children under five were reached with polio vaccines during the latest phase of a Ministry of Health led campaign in Syria between 2-6 March.

UNICEF, WHO, and the Syrian Arab Red Crescent are all supporting the polio campaign, which has been running monthly since December 2013. This is on top of polio vaccinations which took place in October 2013 as part of bi-annual national vaccination campaigns for polio.

Figures just released from the March round show that nearly 3 million children were vaccinated in all 14 of Syria’s governorates. This is the highest number of children reached out of the four monthly vaccination rounds to date. The total includes 394,927 children in Rural Damascus and 243,638 in Aleppo, as well as 221,954 children in Deir Ez Zour, where most polio cases are located. Some remote areas are yet to provide results, so the numbers may go still higher.

Almost 9,000 health workers and volunteers contributed to the campaign from fixed health centres and mobile teams.

Despite the large reach of the campaign, however, the on-going conflict and constantly changing security situation mean there are still children who remain inaccessible to vaccinators. The most difficult to reach areas are located in Rural Damascus, Hassakeh, Aleppo, Raqqa, and Rural Hama. In addition, the high level of displacement in Syria – more than 6.5 million people and almost 3 million children – further contributes to the complexity of reaching all children under five.

“It has been inspiring to see the dedication and commitment of the vaccinators, who have done their utmost in the face of a complex environment to reach as many children as possible,” says Dr. Iman Bahnasi, UNICEF Syria Child Survival and Development Specialist. 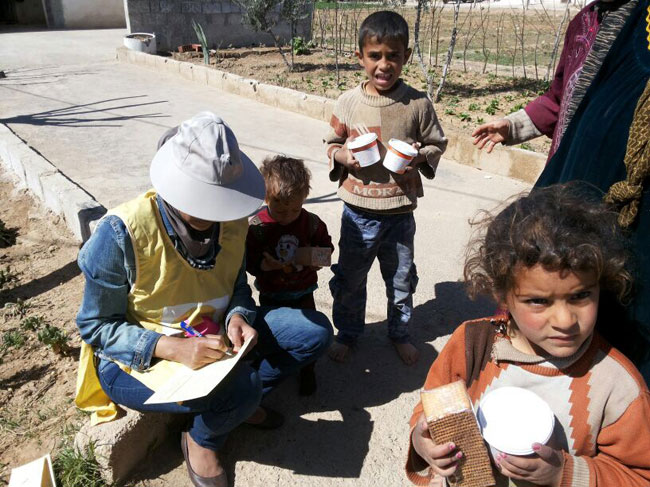 A member of the mobile polio vaccination team makes notes during a visit to Al Tal town, rural Damascus. © UNICEF/Syria-2014/Hilal

UNICEF has provided 15 million doses of oral polio vaccine in support of the campaign and plans to deliver a further 3 million doses for the May vaccination round. To strengthen the vaccine cold chain, we’ve supplied 25 cold rooms with generators and provided 200 cold boxes, 2,000 thermometers, and freeze tags, which allow monitoring of the temperature of fridges where vaccines are kept. We also supports vaccination operations centres and provides technical assistance.