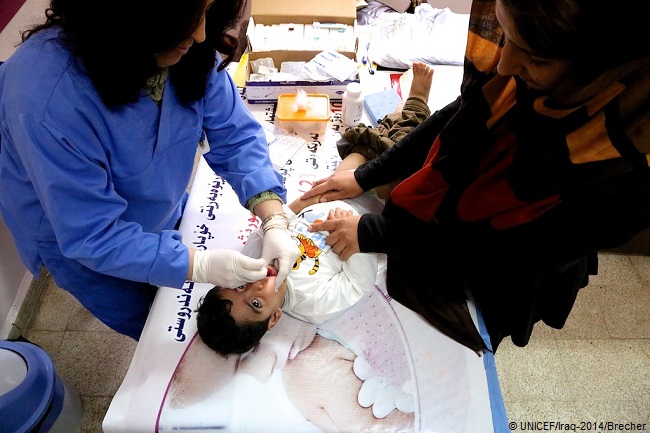 Baghdad, Iraq, March 30, 2014 – Preparations are underway for a new round of polio vaccinations in Iraq. The preventative campaign is in response to the first confirmed case of the disease in the country in 14 years.

The World Health Organization says a six-month old baby near Baghdad has contracted the debilitating virus, which is generally found among children under five years old. The strain reportedly matches one observed in Syria, though how the Iraqi child contracted the virus is not known. The WHO says displacement caused by the ongoing violence in the Anbar Province of Iraq and Syria may be to blame.

The new case is an indication that there are still children who are not being reached with vaccines, so a new round of vaccinations is planned from 6-10 April. It’s a crucial part of the Iraq response to the outbreak of the virus-borne disease.

“Polio is one of the most debilitating diseases a child can contract. There is no cure. The only way to fight the virus is to prevent it through immunization,” says Zainab, a 27 year-old Iraqi vaccinator. “I go from house to house, count the number of children and give them the oral polio vaccine drops (OPV). Not a single child should be missed, otherwise the whole community is at risk.”

Alarms bells were raised and a regional response was implemented when polio was detected in Syria in October 2013. To date, 26 cases of polio have been confirmed. The Iraq response to the initial polio outbreak in Syria has included five large-scale, supplementary immunization activities using OPV’s to reach children under the age of five, and in some cases children in older age groups. So far, more than 22 million children have been reached in the Eastern Mediterranean region.

During the last immunization campaign, in early March 2014, 92% of Iraqi children were reportedly reached despite challenges that include Iraq’s geographic expanse, mobile populations and insecurity.

A dedicated polio team has been recruited and will closely support national and international partners to make sure that over 95% of Iraqi children are reached through the next monthly round – the critical threshold required to prevent the spread of the virus.

“One of the most important things parents must understand is that it is not enough to vaccinate their child once, but to make sure children take repeated doses of the vaccine,” said Marzio Babille, UNICEF representative in Iraq. “That is the only way to ensure they, and all children in Iraq are protected against the virus.”

In addition to the procurement of the vaccine, UNICEF is focusing on communications and social mobilization to provide information to increase knowledge, confidence, trust and participation in polio campaign efforts and routine immunization services among Iraqi care-givers, household decision-makers and medical, cultural and spiritual opinion leaders.