Damascus, 25 March 2014 – The on-going conflict in Syria has caused enormous damage to the country’s essential water and sewage systems, putting millions of people at risk of waterborne diseases, and creating huge challenges for the sector as the conflict moves into its fourth year. 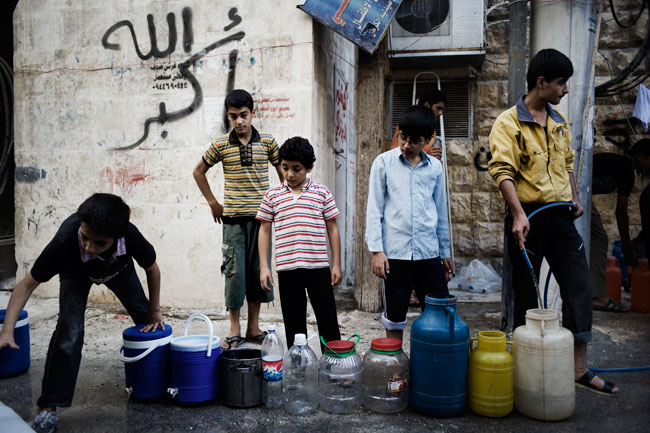 Children line up to collect water from a UNICEF-supported water tanker in Hama governorate. © UNICEF/NYHQ2012-1294/Romenzi

According to our recent report ‘Under siege’, more than a third of water treatment plants have been destroyed, while by the end of 2012, the amount of safe water consumed by families across Syria had already fallen 40 per cent from pre-crisis levels.

“Partnerships are key to the provision of a strong, coordinated, and coherent water, sanitation, and hygiene response, especially in the context of the on-going crisis, where assistance is lifesaving,” said UNICEF Syria Representative, Youssouf Abdel-Jelil, at the recent signing of the 2014 Syrian Humanitarian Action Response Plan (SHARP)-related work plans.

The water-related humanitarian work is carried out with national partners from Water Resources, Local Administration, and the Syrian Arab Red Crescent (SARC).

“Everyone needs water and it is vital that safe water reaches all children and families no matter where they are located.”

There is also an increased risk of the spread of waterborne diseases, particularly as summer approaches. Many of the more than 6.5 million people – including almost 3 million children – displaced inside Syria are living in overcrowded conditions with lack of access to water and sanitation facilities both in shelters and in the host community.

During 2013, UNICEF in partnership with ICRC supported chlorination efforts to provide 10 million people – almost half of the population – with access to safe water. UNICEF also worked closely with ministries and water authorities, providing essential equipment – including generators, pumps, and spare parts – along with technical support to strengthen the water infrastructure and ensure water continues to flow, including in hard-to-reach locations.

UNICEF also worked closely with SARC to help vulnerable conflict-affected populations understand and protect themselves against the threat of waterborne diseases. More than 540,000 people were reached during 2013 with hygiene promotion messages.

With the recent Security Council Resolution calling for opening up of humanitarian access to hard-to-reach and besieged areas, UNICEF is ready to increase the reach of its emergency water, sanitation, and hygiene programmes wherever possible.

During 2014, UNICEF will continue to support water authority systems with chlorine supplies to ensure millions of people continue to have access to safe drinking water. A key priority will be the scale up of water, sanitation and hygiene services with more focus on prevention of water-borne disease and hygiene promotion activities targeting communities and schools in hard to reach areas.