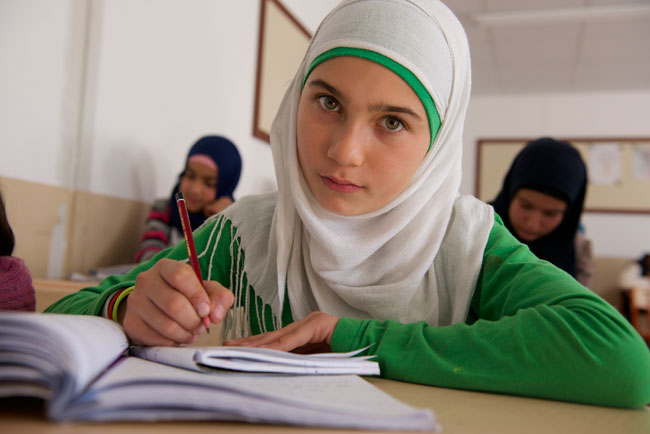 13-year old Rand attends classes in a refugee camp in Islahiye, Turkey. She and her family fled the fighting Idlib, Syria eight months ago. © UNICEF/Turkey-2014/Noorani

Islahiye, Turkey, March 25, 2014 – “We had a garden in our house with lemon trees and grapevines. I loved those trees. I used to climb those trees. I used to watch them from my balcony. My father built our home, and my sisters and I had our own rooms, but they have destroyed it. A rocket landed in the middle of our home and our garden. The grapevine that we used to eat from is also destroyed. I feel so sad about the destruction of my home and my beloved trees,” recalls 13-year old Rand, on her life back in Syria.

She adds, “Life was too difficult, so we had to leave.” The young teenager fled the bombings in Idlib, eight months ago, along with her parents, four siblings, an aunt and grandmother. Now, instead of a house and garden, all nine family members are confined to one tent in a refugee camp in Islahiye, Turkey.

The memory of the family’s escape is still fresh in Rand’s mind. “We lost all services. There was no electricity and we had to use candles. We were extremely afraid, it was so dark. They were bombing us constantly with missiles and rockets. At night we stayed in the basement.

In the morning, they would start bombing again. One night my uncle brought a car to get us out. It was extremely dangerous and we were all crying. We left, but I still miss my lovely and dear country. Turkey is nice, but Syria is my country. I have lost everything.

We have no one here. After we arrived at the camp they gave us a tent. It was very crowded, but now we’ve managed to extend it. I have started to make friends and I have started going to school. I am so grateful, but, if I had the power I would free my country. I want to go home.”