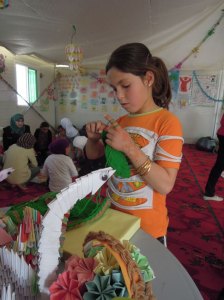 As well as drama, the child friendly space’s activities include sewing and painting. © UNICEF/Jordan2014/Fricker.

Za’atari, Jordan, March 2014 – “We are the children of Syria don’t forget us,” their voices fill the tent with an energy that hits you like the desert wind sweeping across Za’atari refugee camp.

Farah*, an 11-year old from Dera’a, southern Syria, is the lead character in a play that focuses on the right to education. The children performing are at one of 14 child and family centers dotted across Za’atari’s vast landscape that houses some 90,000 people, half of whom are children. The centers provide psychosocial support to children aged 5 to 18.

“There is war and destruction everywhere,” the play continues. “Your dreams will not be lost, without education and learning you will not get peace,” is the response.

Such words of hope were not always there. “On the first day they spoke about and drew blood and killing. But after time they started to draw flowers,” explains Mohamed Alzzeh, a Field Officer with Save the Children, who run the center with support from UNICEF and funding from the European Commission Humanitarian Aid and Civil Protection Department (ECHO). 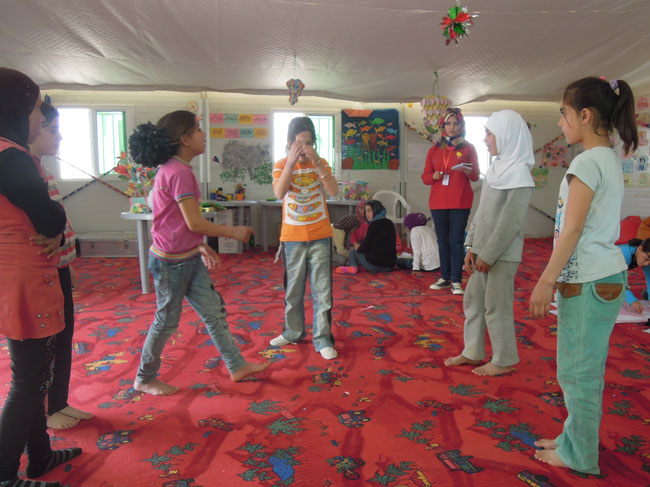 Children perform the play about education at a child friendly centre in Za’atari refugee camp. © UNICEF/Jordan2014/Fricker.

Activities include drama, painting and sewing, among others, and are designed to encourage children to express their creativity and feelings. “The children focus on something, build teamwork and develop their characters,” says Alzzeh.

The interaction is particularly important as young people often use withdrawal as a coping mechanism following their horrific experiences in Syria. Many also haven’t seen their friends since leaving home and establishing new relationships is critical to rebuilding trust.

When Farah arrived with her family in Jordan 10-months ago she was afraid to do anything. “At first I was so scared that I didn’t even go to school,” she says. But after spending time at the center Farah began to open up. “She has a willingness to learn now and to see new things,” says her father Abdul*. His greatest relief is that his five daughters are safe and now participate in normal childhood activities again, such as attending school.

“I never thought we would leave our house or city but we were under attack. My girls were at risk of being kidnapped or raped so we had to go,” Abdul says. He also acknowledges how living in Za’atari is far from a normal life and presents different challenges but it is at least free from violent conflict.

“The future will be much better,” proclaims Farah in the play, like a statesperson announcing to their country. “It’s our right to get education and to live in peace like any child across the world,” the play ends.

With funding from European Commission – Humanitarian Aid and Civil protection (ECHO) and other donors, more than 150,000 children and adolescents have received psychosocial support services since January 2013. Such protection work is critical in providing an opportunity for young people to regain their childhoods and in averting a lost generation.