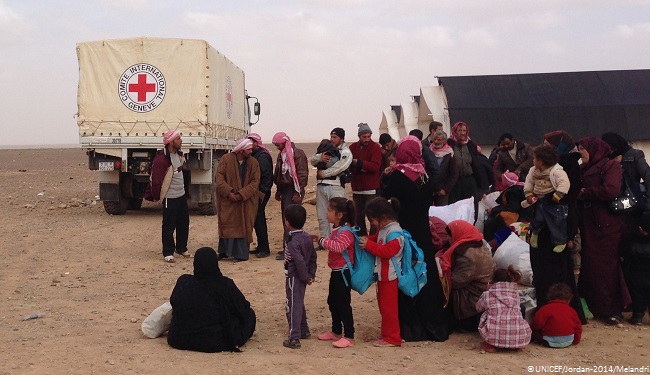 If you had to leave your house in a hurry what would you take with you? For two young girls from Homs, the answer was easy.  It wasn’t clothes or toys, but rather their UNICEF school bags filled with textbooks, pencils and exercise books!

The two sisters had been attending school in their village, where they received support from UNICEF. When their family decided to flee the fighting and re-locate to Jordan they didn’t want to leave without their supplies.

The girls, their family and other refugees were met at the Rukban crossing point on the Syrian-Jordan border by Border Security Forces, UNICEF and the ICRC.  The newly arrived refugee children received clothing kits supplied by UNICEF, and delivered by the ICRC.

The refugees will be housed at transit center before they are registered. They will then be transferred to the Za’atari refugee camp in Mafraq, Jordan.