Hatay, Turkey, March 16, 2014- 13-year-old Ala has been living as a refugee in Turkey for more than a year now. Even though she misses her friends and her life back in Syria, she is happy to be able to continue her studies. She says, “I am in the 8th grade. My school is so beautiful. Our courses are taught in Turkish and Arabic, and my favourite subjects are Maths and Turkish. I also love the Lebanese poet Khalil Gibran and I read all his poems.” 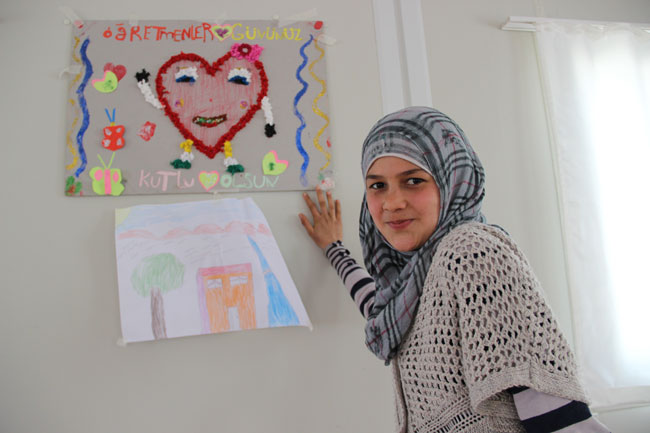 13-year-old Ala at the Child Friendly space in the Altınözü refugee camp in Hatay, Turkey. Ala loves to paint and read poems by the Lebanese poet Khalil Gibran. ©UNICEF/Turkey-2014/Yurtsever

Ala is originally from Latakia, in western Syria. The youngest of six children, Ala made the harrowing journey to Turkey 16 months ago, along with her parents and three of her siblings. She says, “We left our village to escape the bombing. We drove for three hours to get close to the border and once night fell we walked another three hours to cross into Turkey. There were many checkpoints along the way. I saw people carrying guns and I was scared. At the end of the third hour we crossed into Turkey where we were met by soldiers.”

The family now lives at the Altınözü refugee camp in Hatay. One of Ala’s brother’s is still deeply traumatized by the war back home.

“If I were president, I would first ensure the security of my people. I would help the children harmed by the conflict. Children living in the camps on the other side of the border — the camps in Syria — are starving. I would help them. What I want for myself is to grow up to be a doctor,” Ala says.

Please sign our petition calling on world leaders to prevent a lost generation.