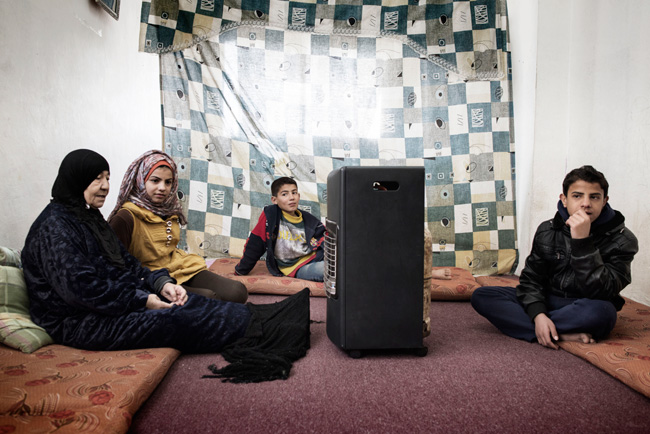 13-year old Biyan sits with her mother and two brothers in their one room home in Amman.© UNICEF/Jordan-2014/Romenzi

By Toby Fricker
AMMAN, Jordan, 09 March 2014 – Sixty pairs of children’s eyes are transfixed on a large screen. The cartoon playing features an owl as it settles on the branch of a tree, while the moon shines brightly behind lighting up the faces in the room.

Biyan from Homs, Syria, is in the audience. At 13 years she’s the oldest, but is equally engaged. The film features her favorite theme. “I love to tell stories about animals and nature,” she says. Her paintings tell another story, “I also draw pictures that focus on the war,” she states, in a matter of fact way.

Cartoon screenings are just one of the many activities on offer at a child and family protective space in east Amman. The UNICEF supported center is run by the local Jordanian Hashemite Fund for Human Development (JOHUD) and international NGO, INTERSOS, with funding from UKAid and the Government of Germany through KfW.

The centre also provides children with an opportunity to interact and to connect with their local communities. This is particularly important for Biyan and her brothers who arrived in the capital, Amman, only two months ago.

Safety at a cost

After reaching Jordan in September 2012, the family settled in the northern town of Mafraq. But not long after tragedy struck. Biyan’s father died from a heart attack whilst watching television. “It was the news covering Syria,” says her mother, Hiyam. Her words stress how the conflict directly catches up on everyone. 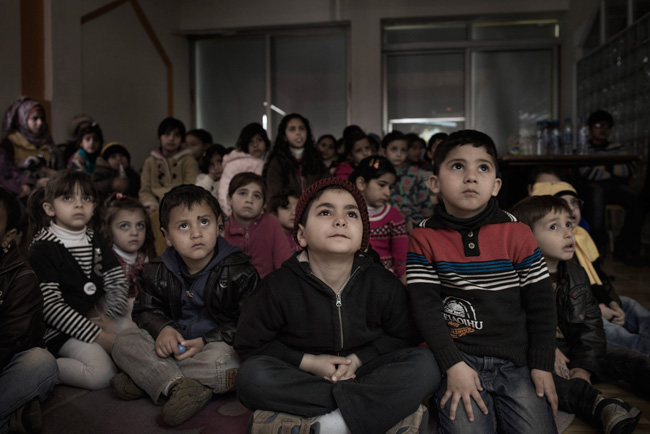 Youngsters watch a cartoon at a child and family protection center in Amman. © UNICEF/Jordan-2014/Romenzi

Through word of mouth the family has since found free housing, a classroom in a former private school. A wealthy individual covers the rent for the 17 families living in the building. Their one room home is free, but it’s dark, dank and basic. Cooking takes place in the school corridor and the classroom homes come fitted with chalkboards.

The morning sessions at the centre give Biyan and her brothers a chance to be part of the local community – and to express their creativity. Biyan’s 10-year old brother, Abdul Khafi, wants to be an artist. Three of his art works are stuck to the wall. All four corners of each drawing are burnt. “It’s deliberate,” he says, as his face lights up, it’s an artistic touch.