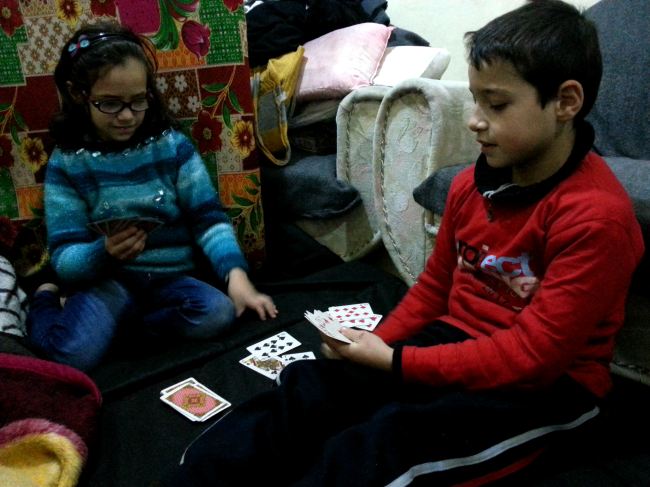 Sedra and her brother Ahmad play cards on the floor of their shelter. The family don’t have beds – they sleep on mattresses on the floor. ©UNICEF /Syria-2013/Youngmeyer

The shelter is a former hospital that was made available to house families displaced from their homes. The shelter accommodates 27 families, with 63 children between the ages of 2-17.

Hamza, his five siblings and parents, live in the basement of the shelter. They share two rooms with other relatives – 12 people in total. There is a small kitchen and bathroom in the entrance area and they sleep on mattresses on the floor. An electric heater helps to keep warm, but there are often power cuts and a lack of diesel to run the building’s heating system.

The family was displaced from their home in Homs almost two years ago because of the fighting. They lived in Rural Damascus for six months, but with their savings depleted, moved back to Homs and into the shelter, which is run by UNICEF partner, Child Care Society. Because they’ve moved around so much, each of the children is two grades behind where they should be.

“I like going to school,” says Sedra, who is 9-years old. “I like English class the most.” The young girl says she would like to be a paediatrician: “I want to help children.”

Hamza reels off the subjects he takes at school: physics, chemistry, biology, maths, Arabic, English, and French. “Before the crisis school was 7.30am-1pm,” says Hamza. “Now there are two shifts each day and we have less time at school. The school is very crowded.”

Sedra and Ahmad both attend the same school, which is about a 10 minute walk from the shelter. Hamza bikes to school, but is worried about the shelling: “I ride my bike very fast when I go to school,” says Hamza.

While life at the shelter provides some respite, the family’s future looks uncertain.

“It’s okay here at the shelter, but I would like to go home and back to my old school,” says Hamza.

As the Syrian conflict enters its fourth year, we’ve released a new report – ‘Under Siege’ – which calls for an end to the violence and immediate access to besieged children in Syria. Read the report to find out more.