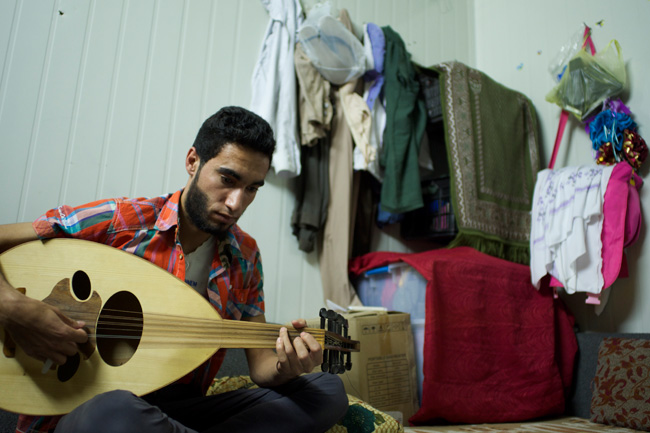 Samer plays the Oud and writes poetry to help ease the loneliness of life as a refugee. ©UNICEF/Jordan-2013/Noorani

Irbid, Jordan, February 2014 – Samer has been living at the King Abdullah Park camp in northern Jordan for a year and a half, and in a poem he describes what his life is like as a refugee: “I wake up in the morning and nothing happens, nothing has changed and there is nothing to do.”

Samer was 17 years old when he arrived in Jordan with his parents, three brothers and a sister.

Originally from Dara’a, Samer missed a year of high school because of the conflict, but eventually finished his secondary studies and was accepted to study business at the University of Damascus. But the war interrupted his plans. Instead, Samer and his family fled to Jordan. As the family escaped, three people they were travelling with were shot and killed.

“At first the fighting was with bullets but when I saw bombs we decided to leave. It’s like an earthquake when the bomb hits the ground, we were so scared,” he recalls.

Samer says boredom is the hardest part of life as a refugee. Since arriving he has only left the camp three times, and only for a few hours each time. When he leaves he must be escorted by another person.

The isolation of camp living is starting to take an emotional toll. He says, “I may only be 19 but I think like I am 100. I’m a human just like everyone else, we are not stones. I wish the world saw our disaster, and then they would take us out of this situation.”

When Samer left Syria he brought two language books with him and has since taught himself to read and write in English. He was also given a guitar by a visiting foreign donor and has learned how to play.

Music and poetry are helping Samer cope. But, he says, “I’d prefer to go back to Syria and live under bombings and bullets than live here without dignity. I would return but I know my mother would be crying all the time, so I’ve stayed.”

So, for now, Samer remains in Jordan, playing his guitar, writing poems and counting the days until he can go to university, hopefully in Europe.

As the Syrian conflict enters its fourth year, UNICEF has released a new report – ‘Under Siege’ – which calls for an end to the violence in Syria and investment in psychological protection of the children affected. Read the report to find out more.