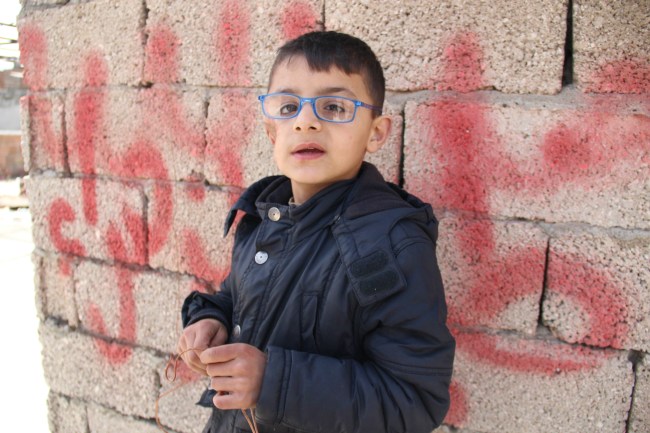 9-year-old Safi was injured by shrapnel when a barrel bomb dropped near his home in Syria. He and his family now live in a host community in Antakya, Turkey. © UNICEF/Turkey2014/Yurtsever

Antakya, Turkey, March 2014 – “Some of my friends are frightened of me because of the scar on my face and they don’t want to play with me,” says 9-year-old Safi. “But I do have one friend and I love him so much.”

Before Safi and his family fled to Turkey, the young boy was injured in a bomb attack near the port city of Latakia, Syria.  “An aeroplane dropped a barrel bomb near our house, which shattered all the windows. I was hurt when they dropped another bomb. I got shrapnel fragments in my face and back,” he recalls. “Someone from our village was going to take me to the hospital, but we couldn’t go because it was too far away and it would take a lot of time. I still have some shrapnel in my back, but I wasn’t afraid at those moments at all. I didn’t feel anything.”

Now Safi, his parents and three younger siblings live in a host community in Antakya, Turkey, where he is able to go to school, as a second grade student. “My favourite subject is spelling. I go to school at 8 o’clock and I do my homework in the afternoon. Later, I play games in the park and in the evening I have dinner. I like football — I’m a fan of Barcelona FC,” he says.

Like many refugee children, Safi says he hopes to become a doctor when he grows up. “I want to save people from oppression. I want to become a doctor and I want to help people who are affected by the war and to save their lives.” And his other dream? To return home, he says: “Syria is more beautiful than here. I miss our house the most. I miss everything there.”

For now, Safi is able to live safely away from the bombs. According to his teacher, he will soon undergo another operation to treat his injuries, with the help of benefactors from Kuwait.

As the Syrian conflict enters its fourth year, UNICEF has released a new report – “Under Siege” – which calls for an end to the violence against children in Syria. Read the report to find out more.