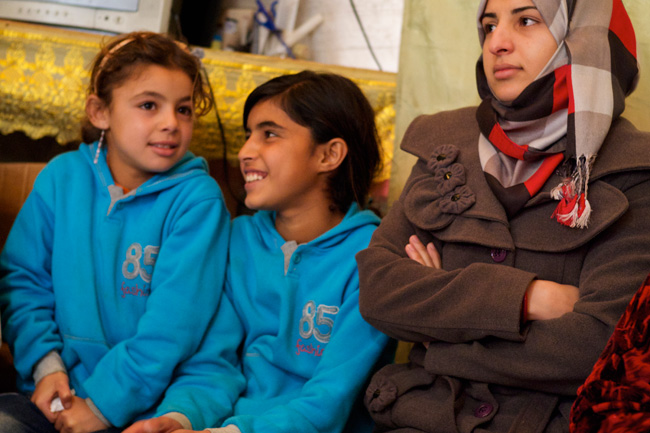 18-year old Huda (right) sits with her siblings in their tent at an informal settlement in Lebanon. ©UNICEF/Lebanon-2013/Noorani

Bekaa Valley, Lebanon – Huda sits in a tent, surrounded by her family, and talks about leaving her village in Idlib, Syria, just over a year ago. She was 17 years old and had just started taking exams for her high school degree.

“I knew before we left, from watching television, that Syrian refugees suffered when they left home. I was sad to leave, but we had no choice because our house was bombed,” she says.

On the day of that attack, 17 people in her village were killed. She holds back tears as she recalls, “I heard the explosion and saw the dust go up. I thought my family was dead. I was injured, there was blood going down my face and all I could do was scream, ‘God help us!’”

The family decided to move to Lebanon for a safer life. Huda says, “I was determined to leave Syria. My little sisters and brothers were so afraid every time they heard shooting. They wouldn’t eat, drink or play. ”

From her quiet village life in Syria, Huda now lives cheek by jowl in a tent, at the crowded Dalhamieh informal tented settlement in the Bekaa Valley. Initially she was shocked by the living conditions, but she has adjusted the best she can saying. “I am now a refugee. The noise, the people, the tent, you have to adapt and for now I have to forget my previous life.”

To help her family make ends meet, Huda was forced to start working. “I had to work in the field harvesting cucumbers. I hate cucumbers now; I can’t even look at them anymore. I have never worked in my life. I was preparing to go to university,” she says sadly.

Even though her life has been turned upside-down, Huda is trying to stay up-beat. When UNICEF’s partner, Beyond Association, started non-formal education activities at the settlement, Huda volunteered to be a facilitator. She is finding strength in the hope of the four and five-year old children she works with, saying, “They talk to you with such optimism. When I see them, I think, if they can be this positive, why I can’t I?”

As the Syrian conflict enters its fourth year, UNICEF has released a new report – ‘Under Siege’ – which calls for an end to the violence and immediate access to besieged children still in Syria. Read the report to find out more.