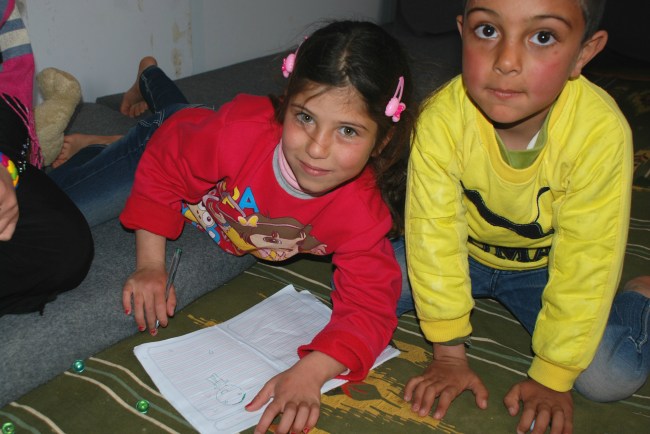 Raneem draws pictures with her brother next to her in the family’s caravan, Za’atari refugee camp, Jordan.
©UNICEF /Jordan-2014/Wright

Amman, Jordan, February 2014 – Each time I visit Za’atari refugee camp in northern Jordan, I’m struck by the many stories I hear from refugees about the events leading up to their arrival. And the more I realise that behind the smiling faces in the hustle and bustle of families carving out new lives for themselves, there are countless scars – invisible scars – from the conflict they’ve left behind.

Take 8-year-old Raneem, for example. Despite now being in the safety of the refugee camp, Raneem still lives in constant fear of what she went through back home in Kalamoon, rural Damascus.

“They were bombing the village, and she was at school,” says Raneem’s mother, Kholoud. “The fighting was going on around the school, and the children were trapped inside all day.”

Whenever their village was bombed, the family fled to a shelter along with more than 500 other people. “15 days of being in and out of the shelter, with shelling all around,” Kholoud recalls. “Raneem became really afraid and would often grab hold of me.”

The family moved to Za’atari a month and a half ago, but Raneem won’t venture more than ten metres away from the caravan they now live in. “She’s always afraid, she won’t even go to the toilet on her own inside the camp,” Kholoud continues.

Kholoud is worried about her daughter’s education. “When I tell her she’s got to go to school, she gets angry and becomes a different person. No matter what things we try, she won’t go.” Raneem’s behaviour has even started to rub off on her younger brother Abdel Aziz – a normally sociable boy who loves playing with marbles – and he’s started refusing to go to school too.

The one place that Raneem does occasionally go to – even on her own – is a UNICEF-supported ‘child friendly space’ run by our partner, Save the Children, where children take part in creative activities such as drawing, modelling and singing.

With support from Save the Children and UNICEF, Raneem’s parents hope she’ll soon go to school. “She has potential, she’s really smart,” Kholoud says.

As the Syrian conflict enters its fourth year, UNICEF has released a new report – ‘Under Siege’ – which calls for an end to the violence and immediate access to besieged children still in Syria. Read the report to find out more.