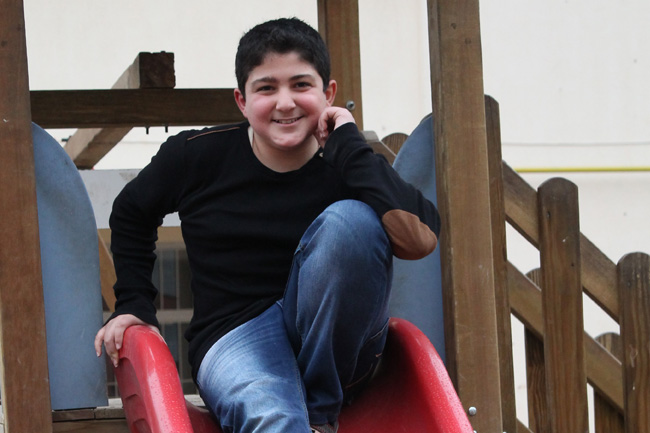 Mustafa and his family fled the fighting in Hama, Syria for a safer life in Turkey. At his new school in Nizip, the young teenager is at the top of his class, and wants to be an engineer. ©UNICEF/Turkey-2014/Jansen

Nizip, Turkey, January 2014 – Thirteen-year-old Mustafa remembers his school days back in Hama, Syria all too well. But today, his family has a new life in Turkey and he has no reason to return. “Everything is bombed. There is no school anymore, and the teachers have long gone,” he says. In Hama, Mustafa was the best student in his class. And in Nizip he still is. He adds, “I would like to become an engineer. Most people want to become a doctor, but I can’t handle the blood.”

In Syria, Mustafa’s father was a lawyer. And because he was involved in the fighting, the family believes there is no way they will ever be able to go back to their homeland. But Mustafa says, “I feel at home in Turkey, I already speak Turkish. There is nothing left in Syria. My house is burned, our car is burned and our belongings were stolen. All I had to take with me were the clothes I was wearing. Luckily, the Turkish army helped us to get across the border. I feel lucky to be safe.”