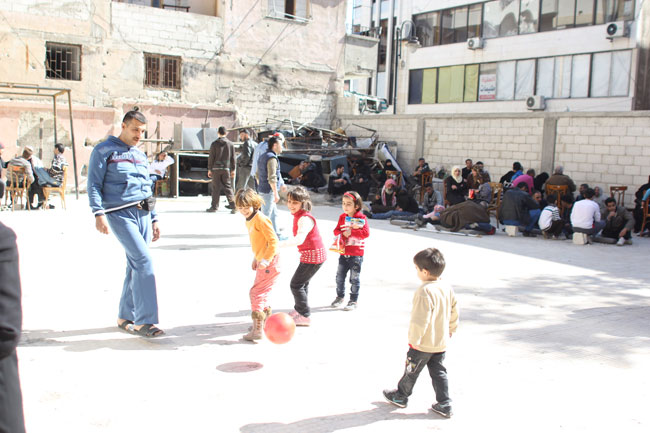 Abu Ibrahim kicks a ball with his children at the Al Andalous facility where he is being held for security clearance. He was just evacuated from the besieged Old City of Homs after an 18-month separation from his family. ©UNICEF/Syria-2014/Rashidi

Homs, Syria, February 20, 2014 – Abu Ibrahim runs around the school playground kicking a ball with his two-year old son. It’s the first time he’s seen the little boy since his wife and four children fled the besieged city of Old Homs.

Abu Ibrahim was finally able to leave the area two weeks ago, during a humanitarian relief effort to evacuate trapped residents.

Read about the evacuation of children and their families from the Old City, Homs.

Since then, Abu Ibrahim has been held at the Al Andalous school, now a make-shift holding facility, where men between the ages of 15-55 are being interviewed by Syrian authorities. While he waits to be cleared his family is allowed to visit him. *

“My boy is still not that familiar with me” says Abu Ibrahim. He and his children had minimal communication during their long separation, but their mother made sure they remembered their father by showing them photographs. Today 11-year old Sidra proudly tells her dad that she now knows how to make tea, coffee, rice and eggs.

On a second visit, father and son spent most of the day passing the new ball across the yard. Abu Ibrahims’ three young daughters join in recreational activities provided by volunteers of the Syrian Arab Red Crescent with the support of UNICEF. He stops by to watch them draw pictures. The four children and their mother now live at their grandparents’ house in Ghota, Homs, waiting for “dad to take them back home”, in the words of 8-year old Aya. 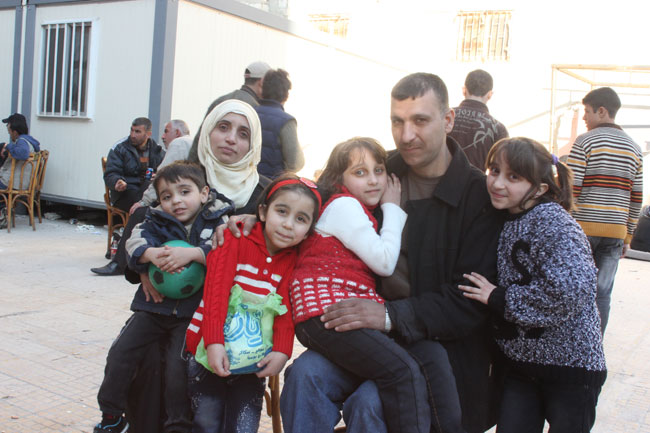 Abu Ibrahim is reunited with his family after being evacuated from Old Homs in early February. His wife and four children visit him at the Al Andalous facility where he is being processed by Syrian authorities. ©UNICEF/Syria-2014/Rashidi

*A UN Protection Response team is on hand to monitor conditions at the facility and the treatment of detainees. So far, half of the nearly 600 men brought here have been cleared and released, while those who remain are still unclear about their fate.