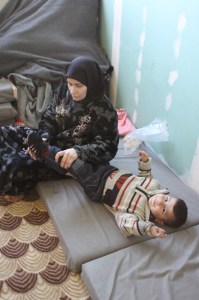 Ahida helps her 3-year old son child Hussein wear new shoes provided by UNICEF. Along with four of her children, Ahida and her husband were evacuated from the besieged old city of Homs on February the 7th. Now after her husband and her 16 years old son were cleared following “security processing” they have nowhere to go. UNICEF provided warm clothes for children in this facility ©UNICEF/Syria-2014/Rashidi

Homs, Syria, February 22, 2014 – “We have no idea where to go now”, says Ahida. She and her four children have been living at the Al Andalus facility since early February when the family were evacuated from the besieged old city of Homs. Her husband and 16 year-old son had to be interviewed by Syrian officials before they could leave.

“When we left the old city, we knew we wouldn’t have anywhere to go, Ahida explains. “But we had to leave because we were tired of being hungry all the time.”

The family were among more than 1,300 civilians – including 330 children – who were evacuated from the old city of Homs during a United Nations-monitored mission. Most evacuees showed signs of trauma, illness and malnutrition.

“We waited for assistance for so long,” recalls Ahida. ”There were many rumours that we would be rescued and the world woulld not let us die of hunger,” says Ahida.

During 600 days under siege, Ahida says she and her neighbours had to adapt to the harsh living conditions. “We started cooking grass and weeds for our main meals. We boiled herbs to make soup for the children. We had little to eat for ourselves because the children came first,” she added.

Ahida has two other daughters who now live in Damascus, one of whom she hasn’t been able to contact, after their phone was destroyed in the shelling. For now Ahida will have to wait to see the rest of her family, as they decide where to go next. 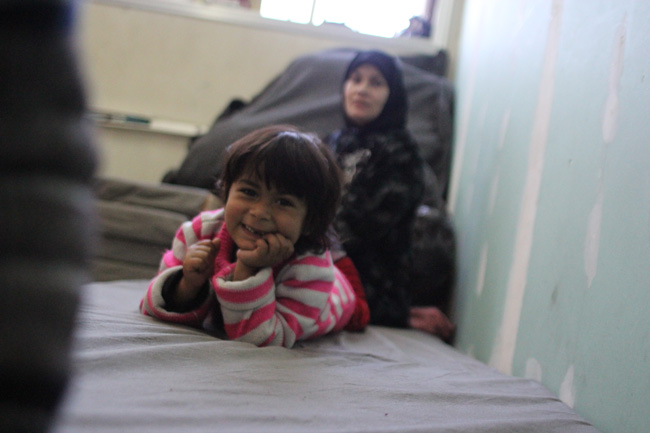 Five-year old Aya and her family were evacuated from old Homs on February 7th during a humanitarian mission involving the UN and Syrian Arab Red Crescent (SARC). Now she and her family are living at the Al Andalous facility in Homs because they have nowhere to go. Aya has been attending UNICEF-supported recreational activities where she plays, draws and interacts with other children. ©UNICEF/Syria-2014/Rashidi

An estimated 600 males have been brought to the Al Andalus shelter facility for screening since evacuations from the Old city of Homs began on February 7. As of February 24, about half of those people had been cleared.