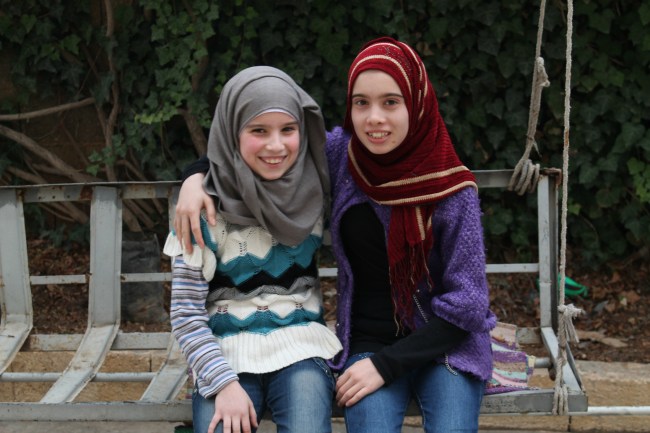 Iman (right), her sister Amel and their family fled heavy fighting in Syria for a safer life in Turkey. Both girls are studying hard to be teachers. © UNICEF/Turkey-2014/Jansen

Nizip, Turkey, January 2014 – Thirteen-year old Iman and her 11-year old sister Amel know what they want: “To go to school, study hard and become a teacher at our father’s school.”

One year ago, the sisters, along with their five sibling and parents, fled Syria for Turkey. It was a long and difficult journey. As they ran from their house, the children came under heavy gunfire.

“We knew it was never going to stop. We had to run for our lives. We even lived in a cave for a time,” says Iman. “All I took from Syria was my schoolbag and my books. Now we’re in Turkey and we’re safe. We live in the house of a very kind Turkish man and we go to school.”

The girls’ father is one of the founders of a school for Syrian children in a mosque in Nizip. Twelve hundred children attend the school every day, and all thirty-seven teachers work as volunteers. There are approximately 45,000 Syrians who live in Nizip, trying to build a future.

But it’s not easy. “I’m feeling lost,” says Amel. Her eyes tear up when she thinks about her homeland. “I miss Syria so much, especially my house and my best friends. I hope we can go back some day.”