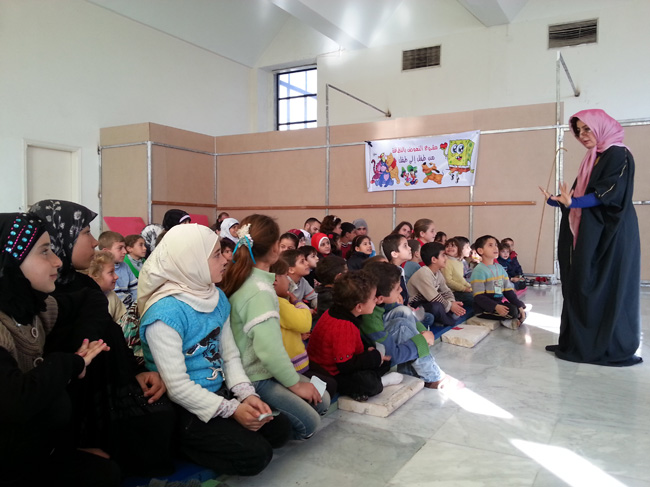 A hygiene promoter leads a session explaining the importance of hand washing, brushing teeth, and washing food. The children, aged between six and 15, have been displaced from their homes by the conflict and live in shelters in Tartous. © UNICEF/Syria-2014/Youngmeyer

Tartous, Syria, February 20, 2014 – UNICEF is spreading the word on the importance of hygiene to displaced women and children in Syria with a four-month hygiene promotion campaign in Tartous, in western Syria.

The campaign, run with our partner, Syrian Arab Red Crescent, will see more than 1,100 families reached with hygiene messages, including increased knowledge on how to prevent water-related diseases, such as the importance of hand washing after using the toilet and before meals. In addition, close to 1,600 families will be provided with sanitation and hygiene kits to support hygienic practices and prevent water, sanitation, and hygiene-related diseases.

An estimated 900,000 people are in need in Tartous governorate, with some 570,000 having been displaced from their homes, largely from Aleppo, Homs, and Hama governorates. While around 12,000 displaced people live in shelters in and around the city – set up in public buildings and outdoor spaces – most children and families live in the host community, such as with friends and family, or in rented accommodation.

“Many displaced families are in shelters, or accommodation in the host community, where they use shared facilities and live in close proximity to others. Improved hygiene helps vulnerable children and families cope better in such surroundings and reduces the risk of water-borne diseases such as diarrhoea,” says Sara Sulieman, a Water, Sanitation, and Hygiene Specialist with UNICEF Syria.

Other initiatives to improve water, sanitation, and hygiene for displaced families in Tartous include the provision of soap and shampoo supplies, and prefabricated toilets in shelters. 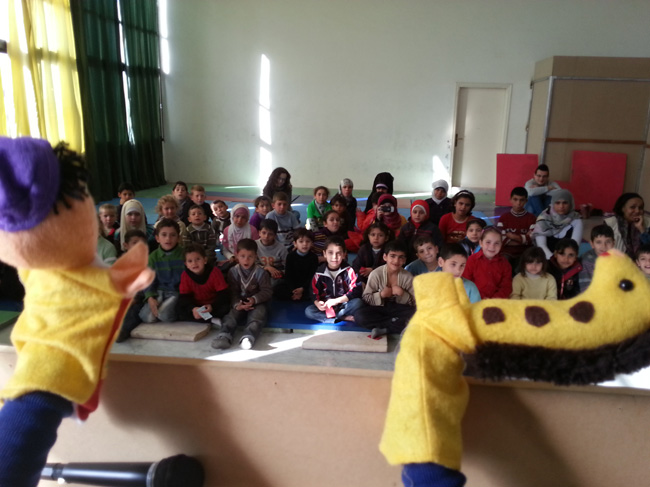 A puppeteer conveys hygiene messages through storytelling. The plot involves a doctor trying to find out whether the giraffe is ill due to a hygiene-related issue. © UNICEF/Syria-2014/Youngmeyer

UNICEF is supporting similar initiatives in other parts of Syria, where displacement, basic living conditions and overcrowding, lack of chlorine supplies, and damage to water and sanitation infrastructure can contribute to an increased risk of disease unless emergency measures are taken. UNICEF recently, for example, provided liquid chlorine supplies in Damascus and Homs to ensure safe drinking water for 4.9 million people for three months.