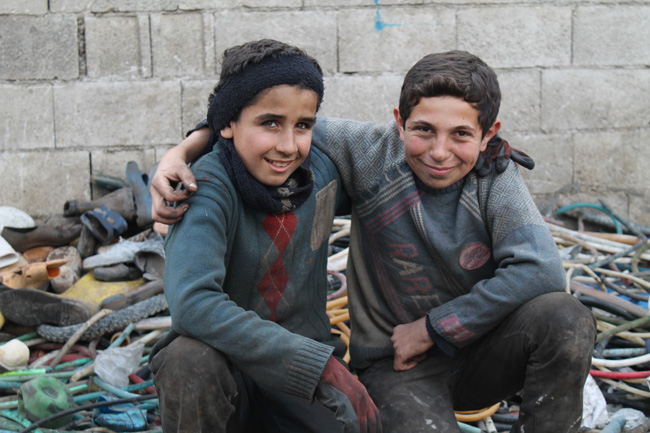 Ahmed (left) and Mahmoud, both from Aleppo, work in a dump in Turkey to provide for themselves and their families. © UNICEF/Turkey-2014/Jansen

Nizip, Turkey, January 2014 – Plastic, metals, paper and rusty washing machines. This is the environment that 14-year-old Ahmed and 15-year old Mahmoud work in every day.

A year ago, the two friends came from Aleppo to Nizip, Turkey with their families and they’ve worked at the rubbish site ever since.

“School is not for us,” says Ahmed. “Who will take care of my family if I go to school?”

Life isn’t easy for the two boys. They work long hours in an unhealthy environment for little money; they earn the equivalent of $5 a day.

But they’re still able to joke with each other: “We just had a warm shower this morning”, says Ahmed. “Liar”, says Mahmoud, “we don’t even have a shower.”

It’s been a long time, but Ahmed still remembers what he learned in school. In the middle of the dump he starts to sing the national anthem of Syria. All the men who work alongside him laugh, but Ahmed is not ashamed. He’s proud of his country.

There are more than 300,000 Syrian child refugees in Turkey. UNICEF is working on setting up a school system for Syrian children who live outside the refugee camps, and supporting schools with teacher training and schoolbooks.