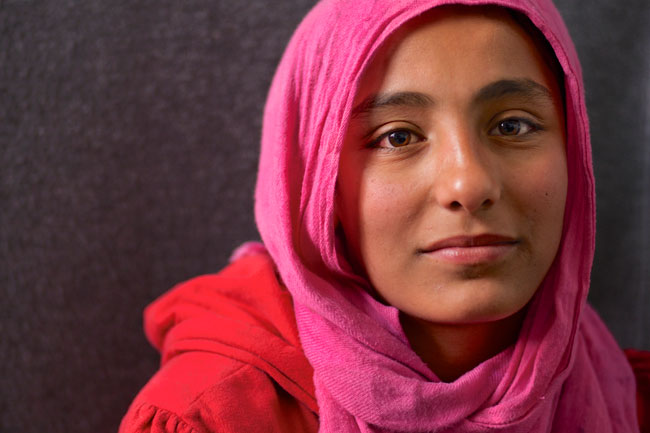 Irbid, Jordan, January 2014– Thirteen-year old Kafa has been living in the King Abdulla Park refugee camp in northern Jordan for a year and a half. When the fighting intensified in her hometown of Dara’a, she and her family made a four hour walk from Syria to Jordan, where they were transferred to the camp.

“One day there were a lot of bombs, and my mother came to my school and said it is no longer safe,” says Kafa.

Kafa’s father died when she was an infant and her mother has now returned to Syria. So she lives with her older brother, his 17-year-old wife and their young daughter. Her aunt, uncle and cousins also live in the camp, with 1,200 other refugees, half of them children.

Kafa and her cousin spend their mornings at a child friendly space built by UNICEF and Save the Children. They play with other children and receive psycho-social support. In the afternoon, they, along with other children at the camp, are bussed to a local school in Ramtha. Kafa is in grade 7 – a grade behind after missing a year because of the conflict back home.

Kafa’s daily chores include drawing clean water for the family at the water taps and making tea for all her relatives. And she complains that her days are all the same in the camp.

“I wake up very early, wash my face, go to the centre, come back to my caravan to do chores and maybe go to school. I used to go to school in Dara’a. Here, sometimes I go but sometimes I don’t,” she says.

“If some people say it’s a good life, I will say come try living here,” she says. “I think of everyone living in a camp and I pray for them. We are not happy here and we want to go home.”