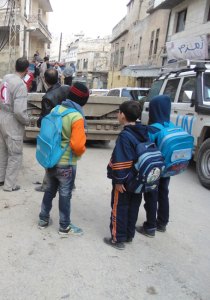 Children, some of them carrying UNICEF schoolbags, watch as emergency supplies are unloaded from a truck in Areha. ©UNICEF/Syria-2014/Kaae

Areha, Idleb governorate/Tartous, 9 February 2014 – Calm has returned to Areha, a town in northern Syria, but the tell-tale signs of heavy fighting are all too visible.

Thousands of children and families have fled Areha, many escaping to nearby Idleb city. Displaced from their homes and communities, they moved to shelters in schools or other public buildings, or squeezed into the apartments of friends or family.

Last week, I was part of a UN inter-agency convoy that brought much-needed emergency supplies from Tartous to Areha, and the nearby town of Muhambel. It has been months since humanitarian assistance has been able to get through.

No one knows how many people have been displaced, but more than half of the town’s population may be gone. Before the conflict began there were approximately 13,000 families in Areha. Now the Syrian Arab Red Crescent estimates there may only be 5,000. The destruction is particularly severe along the former conflict line, where many buildings are completely destroyed or riddled with bullet holes.

This convoy was part of a comprehensive plan by UNICEF and other partners to reach mostly hard-to-reach areas with vital emergency supplies. There were 22 trucks in total, half of them filled with UNICEF supplies; enough for 2,800 families. They included blankets, winter clothes, hygiene kits for babies and families, basic water kits, and soap. 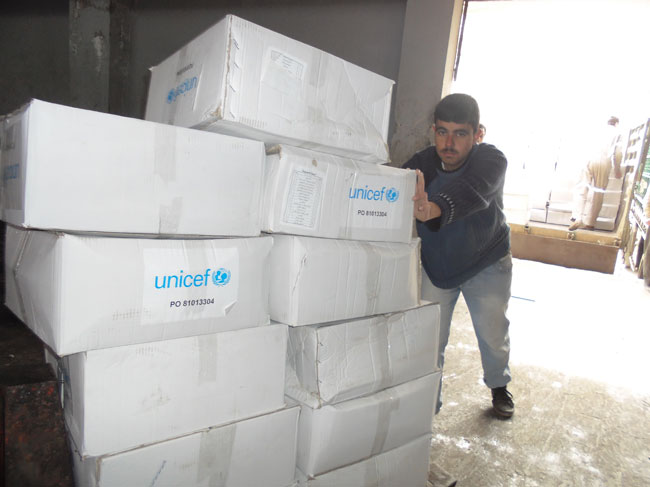 A worker moves UNICEF family hygiene kits from a truck into a warehouse at Areha. ©UNICEF/Syria-2014/Kaae

As the trucks unloaded at a warehouse in Areha, I noticed a number of children with UNICEF schoolbags. I spoke to a 10-year old boy who said his family had fled from Areha to escape the fighting. He said he’d been able to go to school in Idleb where he’d been given the UNICEF schoolbag, which contained stationary supplies. With the return of relative calm to Areha, his family had recently returned home.

It was inspiring to be part of a mission that is bringing immediate relief to children and families caught up in the on-going conflict. These people are really in need. Although the convoy was a success, there remain many challenges in getting relief supplies to the most vulnerable people, many of whom are not accessible due to the conflict. 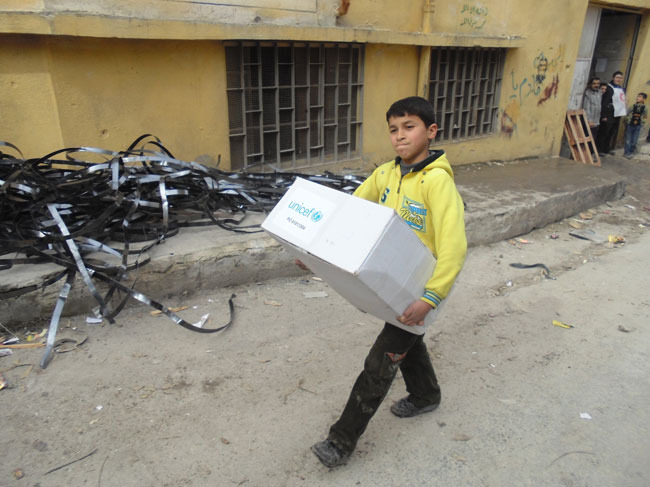 A boy carries a UNICEF family hygiene kit that has just been delivered to Areha town by a UN convoy. ©UNICEF/Syria-2014/Kaae