ISLAHIYE, Turkey, 24 January 2014 – 7-year old Tac Ismail dreams of being a teacher when she grows up. The little girl took a big step towards her goal today when she and her friends received their first school reports at a UNICEF-built school in Turkey’s Gaziantep province.

Those most excited by the end of term ceremony were Tac and other first-grade students, who collected their first-ever school reports. Tac’s class-mate, Serif Abroz, whose family fled from the Syrian city of Edlib, said he’s now looking forward to playing with his friends as classes end for a two-week break.

The school, in the tented city of Islahiye, opened in November 2013, and was constructed by UNICEF in partnership with the Disaster and Emergency Management Presidency of Turkey (AFAD). Operating on a double-shift basis, the school has 46 classrooms which hold 2,544 students, ranging from nursery school to high school. There are a total of 69 teachers, 64 of whom are Syrian and five who are Turkish. 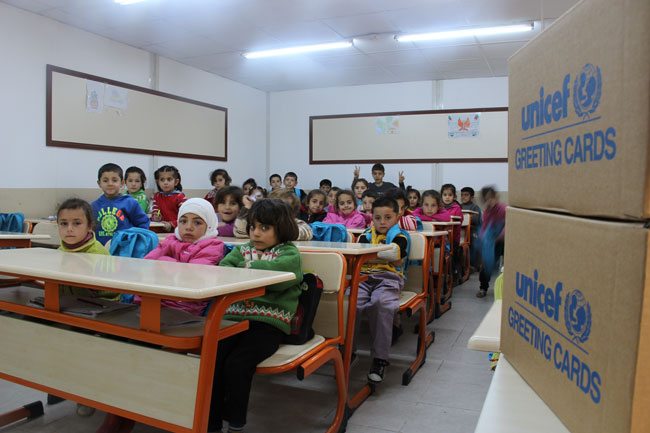 Syrian students continue their studies at a school in a tented settlement in Turkey. ©UNICEF/Turkey-2014/Yurtsever

Those on hand for the distribution of the school reports included Islahiye District Governor Unal Cakıcı, Gaziantep AFAD Manager Sinan Atakan, representatives of the Ministry of National Education and camp managers. UNICEF Turkey presented all the children who received school reports with marker-and-notebook sets. 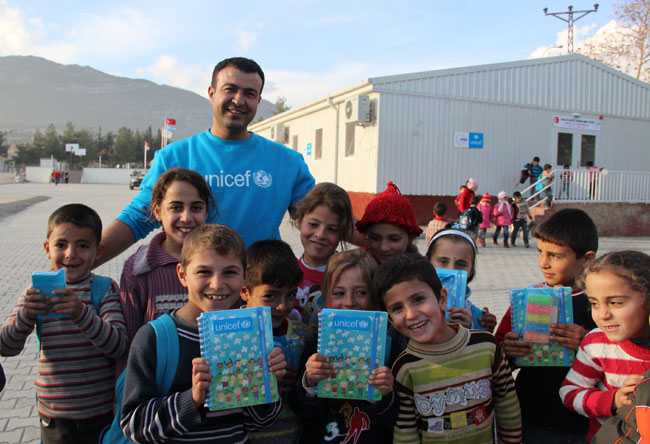 “As UNICEF, our first priority is to enable Syrian children to continue their education and to prevent them from becoming a lost generation,” said UNICEF Turkey Representative Dr. Ayman Abulaban.

“We are putting our time and energy into making sure that Syrian children can continue their schooling. We will be opening more new schools in other camps in the upcoming semester. I would like to congratulate all the children on their school reports and wish them every success throughout the course of their education.”

Add your voice to our No Lost GENERATION campaign.