ZA’ATARI, Jordan, 6 January, 2014 – When the farmhouse that Fatima, Ahmed and their six daughters (aged 2-10) were sheltering in was attacked, each went to grab three of their girls and run for their lives.

“I remember my youngest daughter’s face was covered in blood and I realized I couldn’t find Safa,” says Fatima.

It was a neighbour who eventually found Safa, one of their six-year-old twins, bleeding in burned down trees, and took her to a hospital in rural Damascus. When Fatima and Ahmed arrived, they learned their daughter had been gravely injured and would lose her right leg. 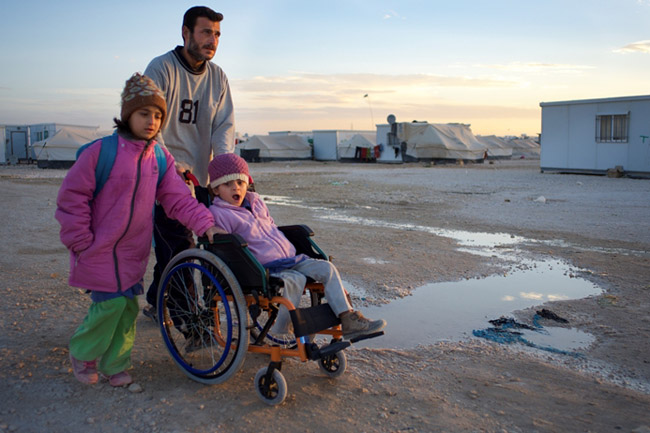 Ahmed walks two of his daughters, six-year-old Safa and nine-year old Aya, to school in the Za’atari refugee camp in northern Jordan. ©UNICEF/Jordan-2013/Noorani

It was the third attack the family had lived through. Originally from Aleppo, Fatima and Ahmed had fled to rural Damascus when their home was destroyed. But after Safa almost died they decided to leave Syria.

“I’m not with any side. What’s the fault of our daughters? They’re not guilty. Why would this happen?” asks Ahmed.

Almost five months have passed since the attack and the family of nine – including Ahmed’s elderly mother Wardeh – now live in a small caravan in the Za’atari refugee camp in Jordan.

Somehow Safa still smiles and has adjusted to having to crawl to get around by herself. But she’s shy and buries her face in her hands when asked questions. The girl’s entire back is covered in scars from the attack. She still has pieces of shrapnel under her skin, which doctors in Za’atari are working carefully to remove.

“Even small sounds make her scared and she hides,” says Ahmed. “All of the girls are living in constant fear.” 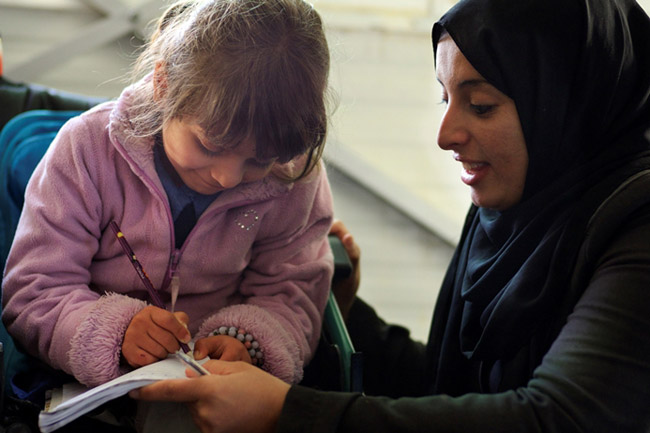 Safa’s teacher helps her to learn in a UNICEF-supported school in Za’atari. ©UNICEF/Jordan-2013/Noorani

Like many Syrian parents, Ahmad and Fatima are determined the conflict, which has now destroyed much of their country, will not destroy their children’s futures.

Thanks to the NGO Handicap International, Safa now has a wheelchair, receives regular physical therapy sessions and has been measured for a prosthesis.

Every morning Ahmed walks his daughters to one of the UNICEF schools in Za’atari funded by the European Union. Safa and her twin sister Marwa are in grade one and their teacher Miss Abeer makes sure Safa is treated like all of the other students. 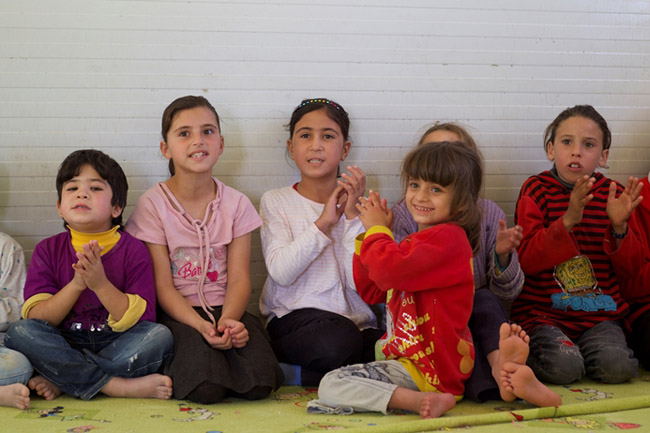 Six-year-old Safa (in red) plays at a UNICEF/Save the Children child friendly space in the Za’atari refugee camp. ©UNICEF/Jordan-2013/Noorani

In the afternoon they go to a UNICEF-supported child friendly space run by our partner Save the Children and funded by the European Commission – Humanitarian Aid and Civil Protection (ECHO).  At the center the children play, socialize and receive psychosocial support. .

Safa says she likes going to the child friendly space, “I like playing. I like the other children there.”

Fatima and Ahmed explain their number one priority is ensuring their daughters are educated. “Even in Syria we managed to keep the girls in school as long as we possibly could. Education is the most important,” says Fatima.

Add your voice to the #NoLostGENERATION campaign.