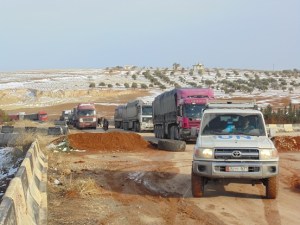 The UN humanitarian supply convoy negotiates a checkpoint during its cross-line mission to a hard-to-reach area of rural Idleb. © UNICEF Syria-2013/Al Kaae

Tartous, 29 December 2013 – I took part in a recent UN convoy that delivered much-needed relief supplies to a hard-to-reach area of rural Idleb, in Syria’s north-west

An estimated 40,000 displaced people have taken shelter in Khan Shikhon town, in the southern part of the governorate, swelling the town’s regular population of around 80,000. They have come mainly to escape fighting their home areas in rural parts of Idleb and Hama governorates.

For many of these vulnerable children and families, the humanitarian situation in Khan Shikhon is grim. Drinking water is in short supply, due to a lack of electricity to run the pumping station. A lack of fuel means that backup generators are also not available. As a result, people rely on private wells to get their water. The water quality cannot be guaranteed, however, contributing to a higher risk of waterborne diseases.

There is currently no electricity, with local residents reporting that they have been without power from the grid for more than 18 months. A shortage of medical staff and certain medicines has left the two hospitals and a clinic only partially functional.

Food is available, but prices have risen dramatically, putting some ordinary items out of the reach of families already struggling to get by.

The community is effectively cut off in terms of communication, with the mobile network, landlines and internet barely working or not available at all. While some 27 schools remain open, they badly need school supplies including desks.

One of the few bright spots is that, despite the difficulties on the ground, children in the town have been receiving their polio vaccinations as part of a Ministry of Health-led national campaign.

Six UN agencies – UNICEF, WFP, UNHCR, IOM, OCHA, and UNDSS – contributed to the convoy which consisted of 10 trucks laden with supplies. Among these were two truck-loads of UNICEF supplies, including soap, washing powder, and family water kits. Each water kit provides for 10 families, including jerry cans and cups, along with aquatabs for water purification. The supplies are sufficient for 3,000 families or around 15,000 people for a month. Other supplies in the convoy included food, blankets, mattresses, and plastic sheeting.

The convoy travelled for two days from Tartous, on Syria’s west coast, through Homs, and then by a circuitous route to Hama in the north. The convoy travelled still further to the north, finally reaching a line of conflict. With the help of the Syrian Arab Red Crescent (SARC), negotiations with various parties including the Governor of Idleb and local community leaders had opened the door for the convoy to cross the conflict line and enter Khan Shikhon.

As we entered the town, people from the local community stood on the roadside waving and smiling. At the warehouse, where supplies were unloaded for distribution to the community by SARC and the community themselves, community leaders thanked the mission team for their support. It was a great feeling to be able to bring humanitarian relief to some of the most vulnerable and hard-to-reach children and their families.

Although on-going fighting has hampered the delivery of humanitarian supplies, this convoy was a positive step forward. Not only did it result in essential supplies getting through, but it also provided an opportunity to meet with community leaders and get a better picture of the humanitarian situation and urgent needs, including the need for education support. UNICEF followed up and was able to deliver school materials for 4,000 children to the Khan Shikhon district: Specifically, school bags containing stationary and recreational kits. School supplies for an additional 4,000 children will be delivered once the security situation allows.

The Khan Shikhon mission is part of a larger effort to access hard-to-reach areas in this and other governorates of Syria with on-going emergency assistance.