In the on-going campaign against polio in Syria, vaccinators will go wherever they can to reach children with polio vaccinations. This sense of mission is perhaps no more keenly felt than in eastern Deir Ez Zour governorate, where 15 of Syria’s 17 polio cases originated.

As part of the December polio vaccination campaign, between 8-16 December, a UNICEF-Syrian Arab Red Crescent team recently travelled from Deir Ez Zour city, across a conflict line, and on into a sparsely populated hot zone to the south-west of the governorate. The mission was only possible with the cooperation of opposing parties in Syria’s conflict.

Once there, they based themselves in two villages where they vaccinated around 1,000 children under the age of five. News of their presence spread quickly, with parents bringing in their children from surrounding villages to receive the lifesaving vaccine.

The team also left a supply of polio vaccines with the local doctor and did training on their administration, in readiness for the next round vaccination round in January.

“I am very glad that this mission could take place,” says UNICEF Health and Nutrition Facilitator, Dr. Suliman Najem, who travelled with the joint team.

For Dr. Najem, polio is a deeply personal issue. His nephew contracted polio in 1998, just a year before Syria was declared polio-free in 1999. “I want to protect all children from the misery of polio. Every child I vaccinate, I feel that they are my son or daughter.”

Close to 2.2 million children were reached during the Ministry of Health-led polio campaign in Syria during December. Of these, 294,360 children were in Deir Ez Zour governorate.

Read more about the vaccination campaign in Syria. 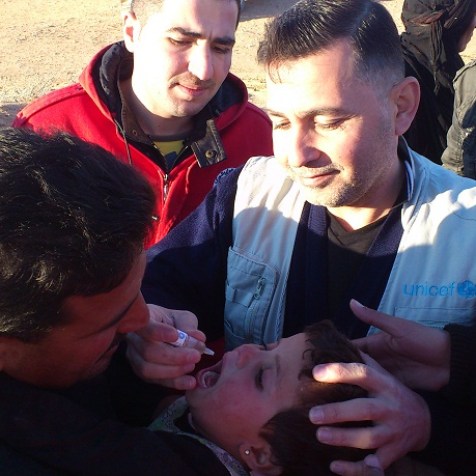 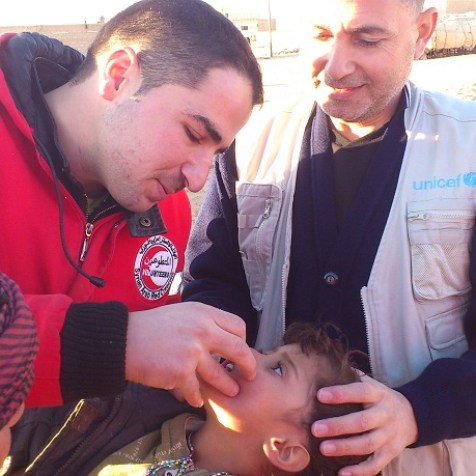 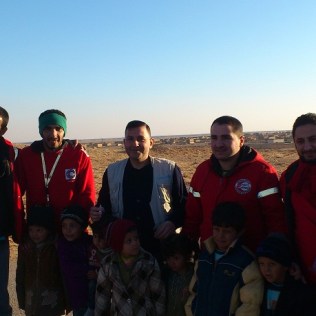 The SARC and UNICEF team with young children in a sparsely populated area of rural Deir Ez Zour governorate who have just been vaccinated against polio. © SARC for UNICEF/2013 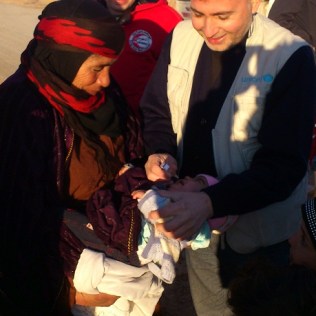 UNICEF’s Dr. Suliman Najem vaccinates a baby against polio during a SARC-UNICEF mission to a hard-to-reach area of western Deir Ez Zour governorate. Around 1,000 children under six were vaccinated during the one day mission. © SARC for UNICEF/2013 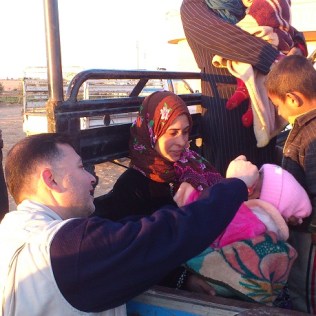 News of the arrival of a SARC-UNICEF polio vaccination team in a remote part of Deir Ez Zour spread quickly among the local community. Dr. Suliman Najem vaccinates a baby who, along with other children, have just arrived on the back of a truck from a nearby village. © SARC for UNICEF/2013
Share and raise awareness on #ChildrenofSyria