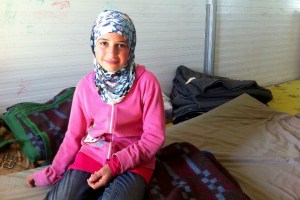 ZA’ATARI, Jordan, 16 December, 2013— This morning I visited one of the child friendly spaces in Za’atari camp now sheltering women and children whose tents were destroyed in the vicious winter storms currently ripping through the Middle East.

“Please, please can you get us a caravan?” said nine-year-old Lojain as soon as I walked into the centre. The little girl had no shoes or socks on.

“I was sleeping in the tent with my brother and it flooded and it fell on us,” she says. I was crying when I woke up, I thought I was going to die.”

Many families in Za’atari have caravans – small portables that provide better shelter from the elements – but others are still in tents.

Over the last four days freezing temperatures, heavy downpours and snow has made life even more unbearable for the hundreds of thousands of Syrian refugees in Jordan.

In Za’atari camp hundreds of women and children are staying in UNICEF and Save the Children Child Friendly Spaces, places that are supposed to provide a safe environment for children to play, learn and receive psychosocial support. Many have now become emergency shelters.

The Child Friendly Space I visited had about 60 women and children, almost all of the women single mothers. 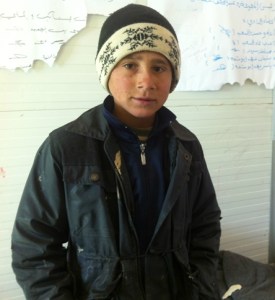 Everyone was from rural Damascus and most of the women are single mothers – explaining their husbands were either still in Syria or dead.

The CFS had about 15 mattresses and a few piles of blankets surrounding a large electrical heater the women and children huddled around. There were children of all ages including Aya the youngest baby at only 2 months old.

Some children were crying, others were playing. All of the mothers looked exhausted and one woman was very visibly pregnant.

“I’ve been here for three nights and I don’t think I have slept at all,” said mother of four Fatima.

She explained that she arrived in Za’atari with nothing, but managed to scrape together some money to buy a few very basic items – some dishes, clothes for the children, food.

“Now we have lost everything again,” she said as her eyes welled up with tears.

Earlier this month UNICEF distributed winter clothing kits to 25,000 children in Za’atari and an additional 10,000 kits are being distributed to families crossing the North Eastern border into Jordan.

Only children under 5 received the kits as they are the most vulnerable to cold temperatures and resources simply weren’t available to reach all children.

After a couple hours of talking to women and children in the centre Fatima’s oldest son Hussein arrived covered in mud. 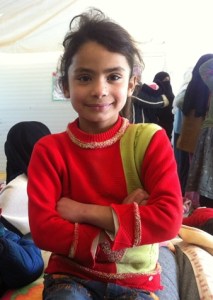 He said that he works now to try to support his mother and siblings, and hasn’t attended school regularly in over two years.

“Before the fighting in Syria I went to school everyday. I used to really like it,” he says.

He says that during the storm a few nights ago he woke up in the middle of the night to water pouring in his tent.

“I was thinking about my father still in Syria, if he was here nothing like this would happen to my family.”

“Its very cold, but what else can we do?” the little boy asks.

It is only the beginning of the cold winter here in the Middle East, so there will surely be storms in the coming months making life even more difficult for Syrian children who have already suffered too much.

UNICEF and partners will continue to do their very best providing warm dry spaces, winter clothes and support for the most vulnerable children and their families, who once again face a frigid, miserable winter displaced from their homes.