Brussels, 18 December 2013 –The European Commission is today signing three major contracts with United Nations agencies totalling €147 million to deliver vitally needed aid to people directly affected by the Syrian crisis. The Heads of the UN Refugee Agency, the UN World Food Programme and UNICEF, meeting with the Humanitarian Aid Commissioner Kristalina Georgieva in Brussels today, are participating in a signing ceremony for this substantial humanitarian funding.

President Jose Manuel Barroso said: “The conflict in Syria has consumed tens of thousands of lives, uprooted millions from their homes, destabilised the region and consigned an entire generation of the young to an uncertain future. It is right that we stand up for the victims of this catastrophe, which is why I am proud that today we are signing some of the largest humanitarian contracts ever concluded with trusted humanitarian partners. I urge the international community to follow suit and replicate our gesture of solidarity.”

Commissioner Georgieva said “Our collaboration with the major UN agencies is vital to the overall relief assistance being provided by Europe for this terrible crisis. Working together has enabled us to reach many of the millions of men, women and children who are suffering as a result of this tragic conflict.”

“These latest contracts will help us to reach even more vulnerable Syrians and those in the host communities beyond Syria’s borders who are struggling under the burden of their generous hospitality. For such a giant challenge we are determined to continue to provide assistance to more than five million Syrian people. Today, each and every beneficiary will be on our minds when these contracts are being signed.”

Under this latest contract, the largest ever to be signed between the European Commission Directorate General for Humanitarian Aid and Civil Protection (ECHO) and a partner organisation, UNHCR will provide assistance to almost three million people – refugees, internally displaced people and local populations – in Syria, Lebanon, Jordan and Iraq. With ECHO funding, inside Syria the UNHCR will provide basic relief items to two million people who are among the most vulnerable in the displaced populations and host communities. In Iraq, the funding will assist in providing registration services and coordination for the camps, basic household items, winterisation kits on arrival for both camps and urban-based refugees, as well as health services for around 190 000 people. In Jordan, the contribution will provide shelter for new arrivals, health services, basic household and other items for camp residents and new arrivals, and some cash assistance for almost 300 000 people. Finally, in Lebanon, the allocated funds will be used for registration of new arrivals, health services and winterization kits for around 510 000 people.

“We must do whatever we can to help those who have lost everything through this conflict. One of UNHCR’s priorities is to bolster support in the neighbouring countries, where the vast majority of Syrian refugees live and where needs are greater than ever. UNHCR welcomes the support from the European Union.”

This contract, the second-largest ever signed by the European Commission for humanitarian aid, will provide funding for the WFP to continue the distribution of vital food, vouchers and cash in Syria, Jordan, Lebanon, Iraq and Turkey – to the internally displaced and their hosts inside Syria, and to vulnerable refugees and host communities throughout the region. More than six million people will benefit.

“The Commission’s consistently generous support has been vital to WFP’s Syria operations. Today’s announcement of a new €61 million contribution represents an extraordinary commitment to the welfare of the Syrian people affected by the escalating and brutal conflict. This crucial funding from the citizens of Europe will help us provide a lifeline to at least four million people inside Syria, and to another 1.5 million Syrian refugees in neighbouring states. Where possible, WFP vouchers and e-vouchers give refugees the power to buy their own food while boosting the host community economies. On behalf of these beleaguered people, we thank you.”

UNICEF – €23 million for water and sanitation for four million people

UNICEF is ECHO’s fourth largest humanitarian partner in the world. The funding will target vulnerable households in Domiz camp in Iraq, refugees and host communities in Jordan and both displaced and host populations inside the most affected areas in Syria. In all these countries, special focus will be to support both children and women. The aid will provide water, sanitation and hygiene promotion to more than 4.2 million people, health care to approximately 700 000, and protection for the most vulnerable to some 4 000 people.

“The children of Syria and many from neighbouring countries are paying a terrible price for the ongoing conflict. Yet this is the generation that will be responsible for shaping the future of Syria and the region – that is why the world has an obligation to support and protect them now. Through the generous contribution of ECHO UNICEF has been able to scale up delivery of life-saving humanitarian assistance including safe water and hygiene supplies in Syria, Iraq and Jordan and we will be able to provide further support for primary health care and assistance for unaccompanied and separated children.”

In Syria, the humanitarian situation continues to deteriorate dramatically as violence has intensified and fighting has continued to spread throughout the entire country.

The United Nations now estimates that 9.3 million people are affected by the on-going violence, withapproximately 6.5 million people internally displaced within Syria. Every day of violence adds to this number.

Aid agencies continue to face significant constraints in reaching people in need. The escalating violence in the country is making it harder and more dangerous for humanitarian workers to do their jobs.

Emergency needs, especially for medical assistance, have increased in the country. There is restricted access to basic services in areas affected by fighting and civilians attempting to flee need urgent life-saving assistance and protection, including food, shelter and water, sanitation and hygiene. Increasing numbers of people are being forced to abandon their homes. Beyond emergency needs, shortages of all kinds are affecting the civilian population, including fuel scarcity.

In neighbouring countries, the number of refugees has increased almost five-fold since December 2012, and there are now some 2.3 million, registered and awaiting registration, in Jordan, Lebanon, Turkey, Iraq, Egypt and North Africa. This number continues to rise as hostilities escalate. Countries bordering Syria are approaching a dangerous saturation point and they need urgent support to continue keeping borders open and assisting refugees.

The EU – the Commission and Member States – is the largest donor since the start of the crisis, with more than € 2 billion donated. This comprises €1.09 billion from Member States, and more than €515 million from the Commission’s humanitarian aid budget. In-kind assistance has also been provided to Turkey and Jordan through the activation of the European Civil Protection Mechanism, which led to the delivery of ambulances, blankets, heaters and other items for a total value € 3.25 million. €461 million has been mobilised through other non-humanitarian EU instruments (for education, support to host communities and local societies).

Provision of humanitarian aid funded by the Commission is channelled through mandated and professional humanitarian organizations in accordance with humanitarian principles; implementing partners are UN agencies, the Red Cross/Red Crescent movement and International non-governmental organizations. Aid is provided to all those in need, irrespective of their creed or political affiliation.

International donors need to increase their financing to cope with the dimensions of this protracted crisis. This will be addressed at a second pledging conference in Kuwait next month. 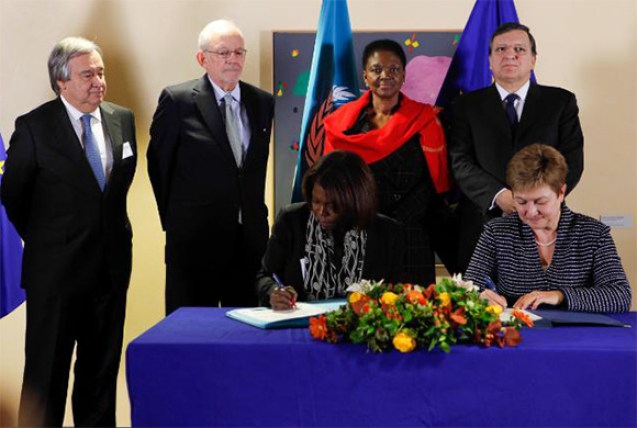 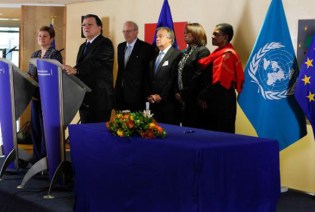 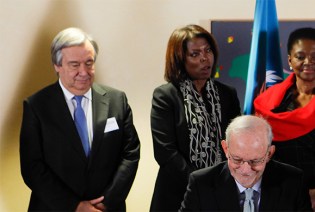 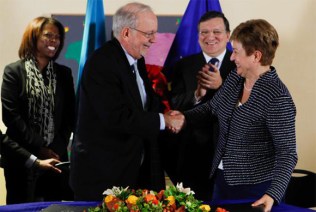 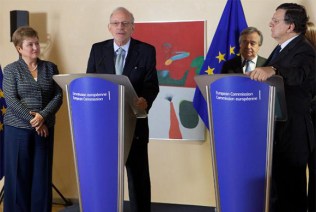 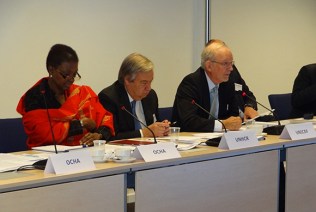 Participation of Kristalina Georgieva, Member of the EC in charge of International Cooperation, Humanitarian Aid and Crisis Response at the Syria Principals’ meeting
Share and raise awareness on #ChildrenofSyria