Amman, Jordan, 15th December 2013 – I stepped out of my front door for the first time in three days and saw a wall of snow, two feet deep. All I‘d wanted to do was visit my local shop, but even walking the 30 metres there took me a while as I picked my way carefully, sliding on tracks made by daring car-drivers. With heavy snow having fallen for several days, visibility was poor and the main road nearby was closed – Amman was in a veritable lock-down. The shopkeeper, rubbing his hands together and hunching his shoulders against the cold, gave me a torch so I could look at the wares on the shelves; the electricity had been out for 48 hours. 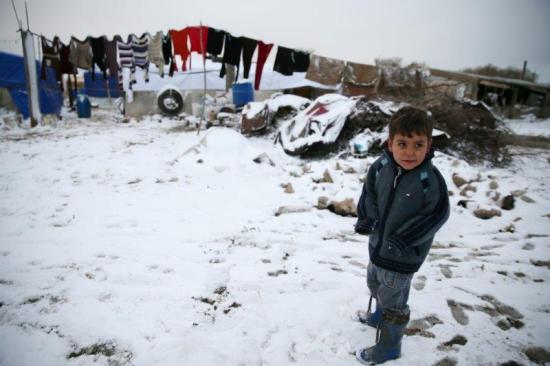 A Syrian boy shivers in the cold in a tented settlement as storm Alexa hits Bekaa Valley, Lebanon.
© UNICEF/Lebanon2013/Haidar

Winter’s arrived even sooner than we feared. All I could think of, as I tramped knee-deep back to my flat, clinging onto my bag of groceries, was what it must be like for the Syrian refugees living in camps and settlements – both official and improvised – across the region; the biggest and most well-known of them, Za’atari, being just an hour’s drive away. For many refugees, this is their second winter living in fragile, temporary accommodation. And it’s only just begun.

“Last winter we only had a tent,” said 15-year-old Fahad, whom I met a few weeks ago in Za’atari. “It leaked and the ground was very muddy around it,” he said. “This year we have a caravan, but I’m worried it’ll still be very cold as we don’t have a heater.” 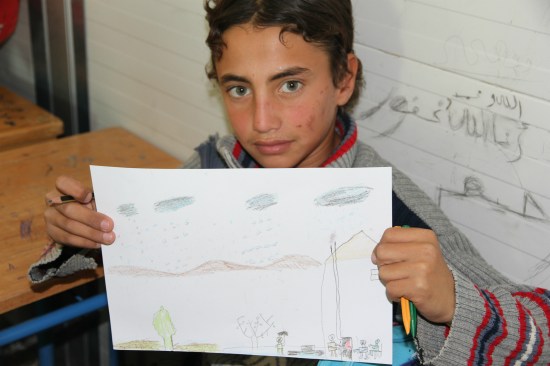 Although UNICEF and other organisations are better prepared this time around, the numbers we’re dealing with have sky-rocketed: last December, there were more than a million children displaced by the conflict inside Syria and in neighbouring countries. Now, that number is a shocking 5.5 million.

A week ago I caught up with two people who worked in Za’atari last year – UNICEF Jordan’s Jane McPhail, Child Protection Specialist, and Carin Boyce, Health and Nutrition Specialist – to find out what the challenges were.

“Last winter was horrible”, said Jane. “Everyone kept saying that it doesn’t snow in Za’atari, but when the really bad weather hit we were literally rescuing families who’d lost their tents in snow storms overnight, with brand new babies.”

“Many people were completely flooded, in their tents, so they couldn’t stay there”, Carin added. “They tried first to gather in other people’s caravans but then, when it was really cold and the snow covered everything, they moved to the school because it became a matter of survival.”

While the UNICEF team worked fast to find shelter for those who’d lost their tents, an outbreak of rotavirus diarrhea in the camp added to the challenges.

“In winter we have seasonal viruses, like flu and respiratory infections that particularly affect children, and if people are living in cold and wet tents, they’re more susceptible to getting sick”, explained Carin. “When it’s cold, people close all the windows. They close the tent so there’s no fresh air circulating. People live more crowded together to stay warm, and they share more viruses and diseases. Last year, children were wearing sandals in the snow. They can catch pneumonia and they can die of that.” 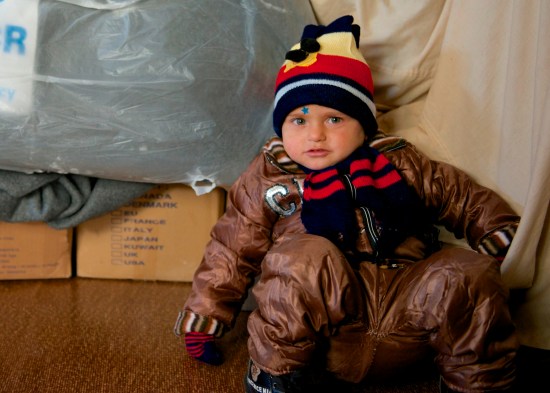 Like last year, UNICEF is distributing winter supplies, reaching over two million children in Syria and the surrounding region. The supplies include clothing kits (hats, gloves, jackets and shoes among other things), blankets and heaters.

But although Syria has been a ‘level 3’ emergency (the highest severity according to the UN) for a long time now, the funding gap for this year is still in excess of $13 million, with new funding needs for the coming year being announced this week that way exceed those for 2013. Unlike natural disasters, the sad reality is that a crisis caused by conflict is much harder to raise money for. 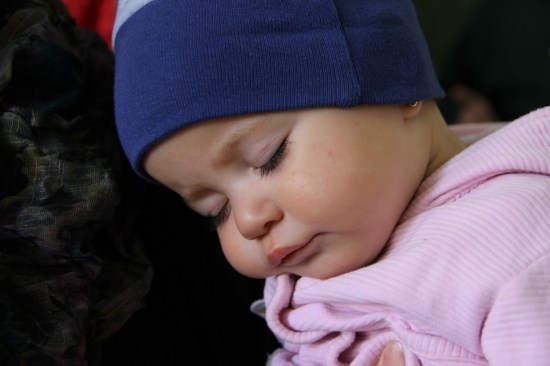 A baby wearing her new winter beanie in a shelter for displaced people in Damascus, Syria. © UNICEF/Syria2013/Rashid

“In Homs, we had everything, but here it isn’t good”, says 9-year-old Shaimaa, who lives in the Lebanese Bekaa valley. “It’s muddy. I get ill often, all the children get ill.”

UNICEF in Lebanon is giving 150,000 winter clothing kits to children living in tented settlements across the country, as well as reinforcing drainage systems and providing concrete floors for people living in tents. But there’s still much more to do. 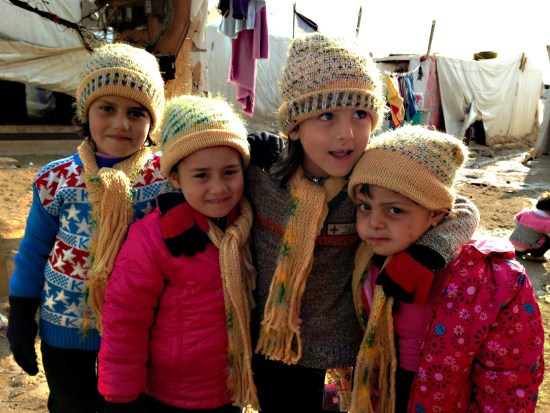 Syrian refugee girls are excited to try on the new warm clothes they received as part of UNICEF’s winter supplies distribution in Lebanon’s Bekaa valley.
© UNICEF/Lebanon2013/Abdulmunem

As I look out of my window and note that we’re still only in December, I find myself hoping that we don’t get to a point where the Syria crisis becomes a natural disaster of a different kind.