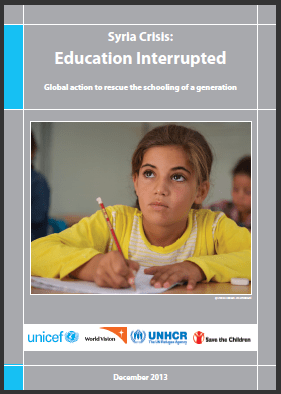 GENEVA/NEW YORK/AMMAN, 13 December 2013 – The decline in education for Syrian children has been the sharpest and most rapid in the history of the region, according to a new paper published today.

“Education Interrupted” highlights that since 2011 nearly 3 million children from Syria have been forced to quit their education as fighting has destroyed classrooms, left children too terrified to go to school, or seen families flee the country. Progress achieved over decades has been reversed in under three years.

The paper is the first attempt to quantify the full extent of the staggering decline in education in a country where primary school attendance rates stood at 97 per cent before the conflict began in 2011.

More than 1,000 days of bloodshed in Syria have seen millions of children lose their education, schools and teachers.

At best, children are getting sporadic education. At worst, they drop out of schools and are forced to work to support their families.

Inside Syria, 1 in every 5 schools cannot be used because they have been damaged, destroyed or are sheltering internally displaced persons, says the paper. In countries hosting Syrian refugees, between 500,000- 600,000 Syrian refugee children are out of school.

The worst affected areas inside Syria are those where fierce violence is taking place – including A-Raqqa, Idlib, Aleppo, Deir Ezzour, Hama, Dara’a and Rural Damascus. In some of these areas attendance rates have plummeted to as low as 6 per cent .

Syria was a regional leader in education enrolment before the conflict, yet in less than three years the sharpest regression in education of anywhere in the region occurred with dire consequences for the future.

The paper details some of the factors that have contributed to the rapid emptying of classrooms.

Inside Syria, intensifying violence, large population displacement, the killing and flight of teachers and the destruction and mis-use of schools have all made learning more difficult for children. Many parents report that they have no option but to keep their children at home rather than risk sending them to school.

In neighbouring countries different language and dialect, different curricula, limited or no learning spaces, physical safety, poverty, and community tensions are keeping children away from classes. Meanwhile, children and teachers from host communities are faced with over-crowded classrooms and increased pressure on education systems.

The paper also sets out critical actions that – if taken now – could reverse the slide. These include: