GAZIANTEP, Turkey, 28 November 2013 – Inside a rugged tent lit by ceiling lamps, children sit three to a desk. It’s music time, and they are singing and clapping their hands, many with their UNICEF cyan blue schoolbags still strapped on their backs.

This is the tent-school of Islahiye camp, in the province of Gaziantep, south-eastern Turkey. But this is no regular school day. In just one hour, these children – all of them Syrian refugees – will be leaving this former tobacco factory which has been their ‘school’ since the camp opened in March 2012. 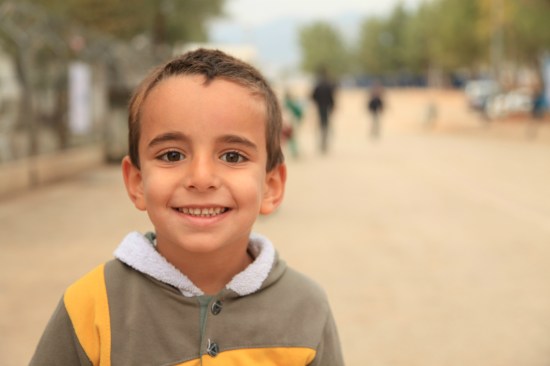 A boy outside the new prefabricated school provided and furnished by UNICEF at Turkey’s Islahiye camp.
© UNICEF/Turkey2013/Feyzioglu

Because just up the road, there is a new purpose built prefabricated school that UNICEF provided and furnished, with funding from the American Government.

“The only concrete structure in the camp was an old tobacco factory which we turned into a school by equipping it with tents that served as classrooms,” says Abu Ahmad, the school principal. “It did protect the children from the elements, but it was dark, damp and had no natural light. The smell of tobacco was also overwhelming.”

None of this anymore – at least for most of the students. The new UNICEF school will accommodate 2,200 school children. Others might have to continue going to the tented school until more space is provided.

For now, and on this opening day, hundreds of schoolchildren are cheerfully lined up in the crisp morning air, waiting to discover their classrooms.

“There are not enough words to describe the suffering of Syrian children,” said Ayman Abu-Laban, UNICEF Representative in Turkey, to a crowd including local officials, representatives from foreign embassies, teachers, parents and children. “Education is what gives them hope for the future.”

Islahiye camp opened in March 2012 and is now home to nearly 10,000 Syrians. It is one of four refugee camps in Gaziantep hosting nearly 34,000 refugees. Another 100,000 refuges live in host communities.

While children living in camps can attend camp schools, those living in host communities are facing serious challenges in continuing their education – and far too many have had to drop out. Long walks to school, sometimes disturbances on the way, and the fact that Syrian children can only go in the later afternoon shift have kept many at home.

In Nizip town, in a four-bedroom apartment shared by 25 members of the same family, a grandfather told us that not all the children can go to school every day.

“The older and younger ones go to different schools which are scattered across town – sometimes an hour’s walk away. Because of the late shift, one of us adults has to accompany them. But if the adults are working, the children get stuck at home. We feel that our children have been forgotten.”

UNICEF has so far provided 3 schools in camps, 1 school in host communities and is finalizing plans to provide an additional 12 schools.

A return to learning is essential if the children of Syria are to be saved from turning into a lost generation.