“The convoy represents one of the largest deliveries of emergency supplies on a single day across conflict lines in Syria,” says Youssouf Abdel-Jelil, UNICEF Syria Representative. “Many families in this area have been cut off from relief supplies since May 2013.” 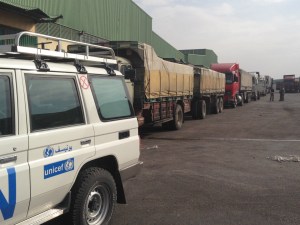 “The operation of a UN hub in Homs has been vital to the development of relationships in the area with all relevant parties and the effective expansion of humanitarian space,” says Mr. Abdel-Jelil.

“This cross-lines convoy was not a one-off mission, but part of on-going humanitarian delivery efforts to get supplies to children and their families in some of the most hard-to-reach areas,” he added.

This is a small but significant achievement.

Between January and October 2013, UNICEF took part in 18 cross-line missions.

Note to Editors: Photos of the convoy are available from link
http://uni.cf/1d6S8Gd