At a vocational training centre in suburban Damascus, Widad, Douaa, Georgina and Dalia have been able to continue their studies, amid continuing unrest. 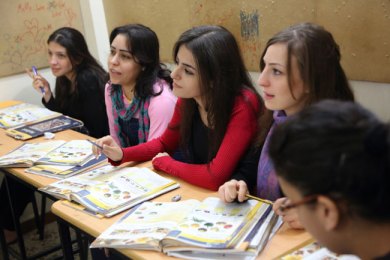 Douaa finally arrives, smiling and apologizing for the delay. “She is always late, and I lose my mobile credit trying to wake her up every day,” complains Widad, good-naturedly. It could be a scene from daily life anywhere, but this is Damascus, the capital of a country in which 6.8 million people are affected by continuing conflict. 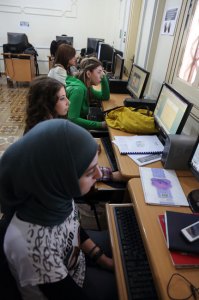 © UNICEF Syrian Arab Republic/2013/Sonoda
According to the centre’s manager, more than 300 adolescents and young people – many of whom have been displaced by conflict – have received training at the centre this year.

The best friends commute together to the UNICEF-supported vocational training institute in Jaramana, a suburb of Damascus, three times a week. With the increased security measures in place, a journey that once took 20 minutes now takes at least two hours.

“We have to take two mini-buses, and sometimes we wait for more than half an hour to find empty seats,” says Douaa.

The centre at which Widad and Douaa study is run by the European Institute for Cooperation and Development and the Syrian Arab Red Crescent. On offer for vulnerable adolescents are such training opportunities as secretarial skills, electrical training, English, digital design and nursing. The young people are also provided with life skills training, which can help them make informed decisions, communicate effectively, lead a healthy and productive life and cope with emotional changes related to adolescence.

With the deterioration of the security situation in many places around the country, access to education and learning opportunities has become increasingly limited, especially for girls.

“More than 300 adolescents aged between 15 and 25 have received training at the centre this year, including many displaced as a result of the unrest,” says Nidal Bitar, who manages the institute.

A place to learn, for displaced girls

Widad is one of these adolescents. Just as she had proudly finished high school and enrolled in a technical university last September, her neighbourhood became the focus of intense military operations. Widad’s family had to flee their apartment, seeking refuge in a relatively safe area, with extended family. “I went to university for a month. Then, my parents decided it was not safe anymore for me to commute to that area,” she says.

With support from staff and peers, the many girls who have been displaced, like Widad, manage to adapt to their new environment, making friends and looking towards a better future. The centre not only provides skills and learning, but also serves as a safe space for adolescents to communicate and feel a sense of normalcy.

Georgina, 20, joined the secretary course after being displaced from her suburban Damascus home a month ago. Like Georgina, a large proportion of the displaced girls at the vocational centre are from Damascus suburbs. Georgina studies hard; she wants to start her own business, one day.

“The best part is the break,” laughs Dalia, 17. Dalia fled from fighting in another part of Damascus. “I made many friends here. Even when we don’t come to the centre, we communicate via Facebook.” As a matter of fact, encouraged by the students, the centre has started its own Facebook page.

Investing in the strength and future of society 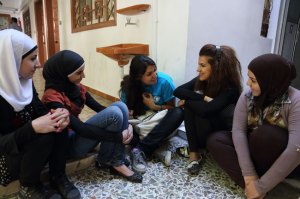 “Today, more than ever, in Syria, it is vital to equip vulnerable girls with skills they will need for the future,” says Adolescents’ Development and Participation Project Officer with UNICEF Syrian Arab Republic Mohamad Kanawati. Mr. Kanawati worked on the design of the vocational training programme.

“It is important that progress is accelerated for the most marginalized girls, with a focus on their learning and empowerment,” continues Mr. Kanawati. “By making available the practical tools girls need to improve their own lives, and by engaging them in efforts to improve their communities, we are investing in the strength and future of the society.”

Add your voice to our #NoLostGENERATION campaign.