DAMASCUS, 19 October 2013 – A Back to Learning campaign in Syria has reached more than 400,000 conflict-affected children with school bags and education supplies, although security and funding challenges continue to hamper humanitarian efforts.

UNICEF, in cooperation with the Ministry of Education and other partners around Syria, is supporting the campaign which aims to reach 1 million conflict-affected primary school-aged children in all 14 governorates. 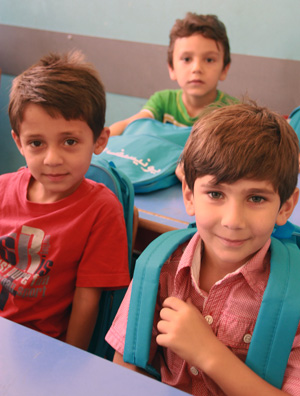 This has been possible thanks in part to the generous support of Kuwait, which has provided more than US$3 million towards the campaign.

“The campaign is on-going, but security and communication difficulties continue to hamper access and limit the distribution of school supplies in some areas,” says Youssouf Abdel-Jelil, UNICEF Syria Representative.

“UNICEF along with other UN agencies continues to call for humanitarian access to all areas of the country so that education and other emergency supplies can reach children most in need.”

The on-going conflict has left almost 4,000 schools – or around 1 in 5 – damaged, destroyed, or sheltering internally displaced families. Some 2 million children in Syria have been displaced. Around 1 million were believed to be out of school inside Syria in the last school year.

As part of the Back to Learning campaign, each child receives a UNICEF school bag that contains learning supplies: notebooks, ballpoint pens, pencils, erasers, colouring pencils and a set of rulers.

For children displaced by the conflict, who may have left their homes in a hurry with little more than their clothing, these supplies are essential for them to continue their education.

“I am happy to receive this bag,” says Muhammad, 9, who fled Aleppo with his family a year ago and now goes to school in Tartous. “When I was in Aleppo, I had no chance to go to school. School was closed due to conflict.”

Posters like this one, which reads in part: “Let’s keep on learning. Learning is joy”, were distributed widely as part of the Back to Learning campaign. © UNICEF/Syria-2013

Tartous is a relatively peaceful area in western Syria that has witnessed waves of children and families who have fled their homes in areas where the conflict is most intense, including Homs and Idleb, in addition to Aleppo.

“Here in Tartous, I feel safe since there is no scary noise of shelling and bombardment,” says Muhammad. “I can also go to school, so I like life here. My favourite subject is English. I want to continue studying and be a good journalist in the future.”

The influx of children to Tartous is placing significant pressure on the existing school infrastructure, with many classrooms being overcrowded and forced to run morning and afternoon shifts. There is also a shortage of teaching staff and learning materials.

To help alleviate the strain, UNICEF has provided 11 pre-fabricated classrooms in Tartous, benefitting around 400 students. Tents are also provided as temporary classrooms where necessary.

Shaza, 15, also from Aleppo, attends the afternoon shift class in a UNICEF-provided pre-fab at a Tartous school.

“Like me, many students displaced from other governorates come to class and study together,” she says. “As many students arrive in school, we need more teachers.”

Shaza says that life in Aleppo was difficult: “My family suffered from a shortage of food, electricity and gas. It was not easy to survive there.”

“Many buildings including schools were attacked and burned down. When I lived in Aleppo, I could not go to school. Children were not allowed to walk outside freely because of the snipers. So I had to stay at home. Security was getting worse day by day and violence was part of our daily life.”

Shaza says that she appreciates the support displaced children like her are receiving, meaning that it is possible to continue receiving an education and look to the future.

Far more financial support and funding are needed to provide more children inside Syria with access to education. Of the US$33.4 million UNICEF needs for education assistance in Syria, just under half, or US$16.5 million, has been received.

* Tomoya Sonoda was recently in Tartous where he talked to displaced children about their situation. David Youngmeyer provided additional reporting from Amman.