HOMS, 9 October 2013 – An eerie calm descends over Al Waer, a suburb on the north-western outskirts of the city of Homs, as we enter this area that is home to some 400,000 people caught in the middle of on-going conflict. I am part of a joint mission, including UNICEF, the World Food Programme, the UN Coordination Agency OCHA and the Syrian Arab Red Crescent, here to assess the humanitarian situation.

Al Waer has been the scene of regular shelling over the past two weeks. Some areas are overseen by snipers, making it hazardous to move around. To gain safe access for UN staff, permission had to be sought from all parties involved. The shelling effectively stopped during our three-hour visit, bringing a brief respite to the residents. After we left, the calm was shattered with renewed sounds of shelling. 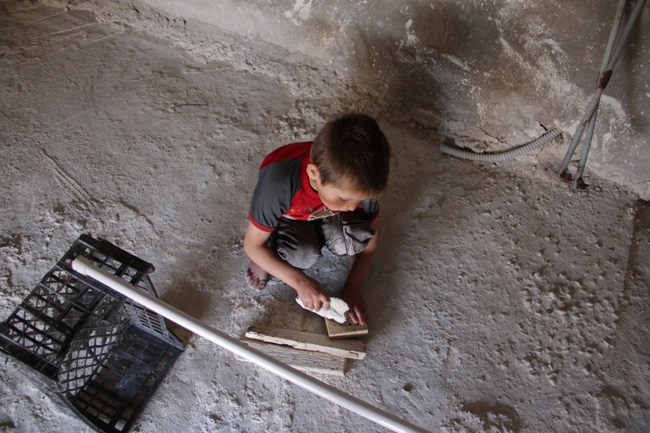 A boy plays outside in a semi-finished building in which tens of displaced families are sheltering. © UNICEF/Syria-2013/Hassoun

When the crisis first began in Homs, many families fled their homes and sought shelter in Al Waer. As the crisis spread, Al Waer became inundated with displaced families. They currently represent around half of the residents, or 200,000 people. The area is largely sealed off, with severe restrictions on movement in and out. Access for humanitarian supplies is similarly affected.

I was last in Al Waer in May 2013. More buildings have been destroyed since then, with more piles of rubble strewn about. With no one to collect it, garbage is piling up in the streets contributing to the spread of diseases. Many children are bearing the marks of insect bites. Other essential services, like health care and education, have deteriorated significantly.

A hospital that was full of patients on my last visit is now practically deserted. Its director told me that the number of mothers coming for delivery services is down by around 70 per cent. Medical supplies are limited. A third of medical staff has left the area, while remaining staff are hardly able to report to work because of the dangers in moving around. The hospital is on the point of closing. UNICEF supports two mobile health teams which visit shelters daily, providing medical assistance and assessing the nutritional status of children. Around 72,000 children have been reached since the teams started work in March.

Children’s education is badly affected. Of the 11 schools in Al Waer which used to support 70,000 children, 10 are being used as shelters for displaced families. The single operating school, which serves around 2,000 children, also devotes some of its limited classroom space to emergency accommodation. Classes that do run are overcrowded. A church basement caters for a further 500 students. Other children learn in the yard or open veranda of schools, where they are exposed to the increasingly cold temperatures and stray bullets which have already wounded some students.

In the shelters, UNICEF supports remedial education classes, linked to psychosocial support, for grade 1-6 children to catch up with missed learning.

To help reduce classroom overcrowding and provide more children the opportunity to learn, UNICEF is negotiating with local partners on the construction of temporary learning spaces. In addition, 13 pre-fabricated classrooms are on their way to the area.

Although most displaced persons in Al Waer live with host families or in rented apartments, around 13,000 of them rely on the 38 collective shelters set up in schools and tower blocks.

I visited a shelter in an unfinished building. Conditions were clean but basic. Some rooms are partitioned with plastic sheeting, with up to eight people sharing a room. People sleep on mats on the floor and many windows and doors are open to the outside, which becomes a serious concern with the approach of winter. Children were taking part in a UNICEF-supported recreation class. Children I spoke to said that they run to the basement whenever they hear the sound of shelling.

The biggest concern for mothers I met was the safety of their children amid the shelling. This particular shelter is close to the front lines and could be hit at any time. Winter was another major issue, with a need for children’s winter clothing; “How are we going to keep the children clean during winter if there is no hot water?” one mother asked.

UNICEF-supported emergency assistance in Al Waer is provided through incredibly committed partner NGOs including the Syrian Arab Red Crescent. Their staff risk their lives daily to get vital help to children in need. The health teams for example have come under fire four times in the last month alone. Just a few days ago, the office of one of our partners in Al Waer was hit by a rocket. Fortunately no one was hurt, but computers and vital records were destroyed, putting the programme work in jeopardy.

Al Waer presents extraordinary challenges to the provision of emergency assistance, but we and our partners are committed to continue to help children facing such desperate conditions.