TARTOUS, Syria, 7 October 2013 — Many children in Syria face extraordinary challenges to continuing their education. The on-going conflict has left almost 4,000 schools – or around one in five – damaged, destroyed or sheltering internally displaced families. Some 2 million children in Syria have been displaced.

Tartous, in western Syria, continues to see an increase in people displaced by conflict in neighbouring areas, which is exerting pressure on overstretched resources, including local schools.

UNICEF is supporting a Back to Learning campaign which aims to reach one million conflict-affected primary school-aged children. School bags containing stationary supplies are being distributed to one million children in all of Syria’s 14 governorates. UNICEF also provides other support to children’s education including tents and pre-fabricated classrooms to alleviate overcrowding of schools hosting displaced children.

A big thank you to the State of Kuwait for supporting this project. 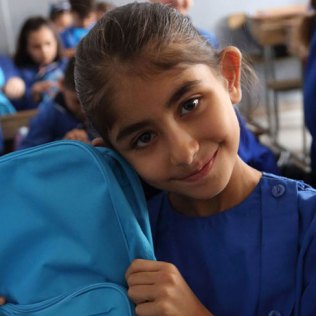 A girl at a primary school in Tartous, who — along with classmates — has just received a UNICEF school bag containing stationary supplies. © UNICEF/Syria-2013/Sonoda 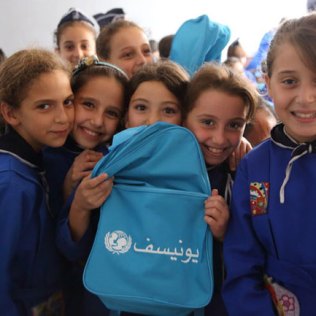 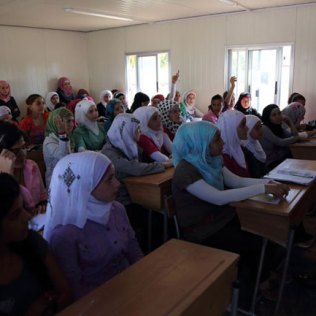 Displaced girls in grade nine continue their education in a UNICEF-provided pre-fabricated classroom located at a school in Tartous. The pre-fab, which is one of four at this school, provides extra classroom space for the growing numbers of displaced children. Although the pre-fab pictured is designed to cater for 35 students, more than 80 children attend this class. © UNICEF/Syria-2013/Sonoda 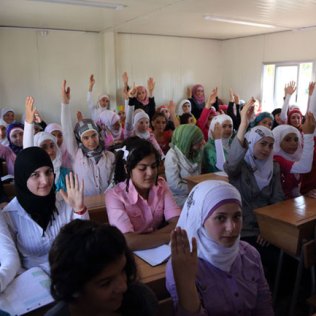 Displaced girls attend school in a pre-fabricated classroom in Tartous. The temporary classroom space is one of four pre-fabs provided by UNICEF at this school. The girls with arms raised are originally from Aleppo. Faced with growing numbers of displaced children, the school runs two shifts. The second shift has more than 1,600 displaced children, with numbers increasing by as much as 30 children each day. © UNICEF/Syria-2013/Sonoda 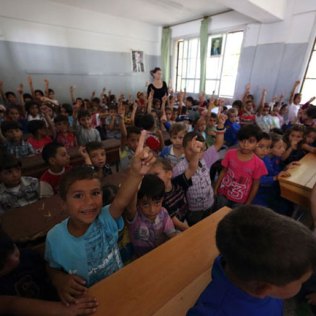 Grade one children, all of them displaced by conflict, attend a school in Tartous. The children with arms raised are displaced from Aleppo. The classroom is overcrowded and represents the afternoon shift. © UNICEF/Syria-2013/Sonoda 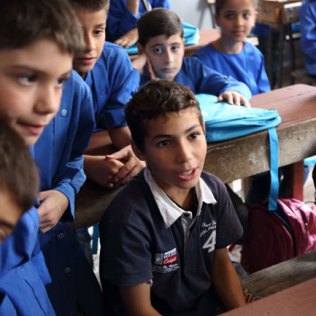 A class of fourth-grade children attend a school in Tartous. Some of the children have been displaced by conflict and do not have school uniforms. The children in this class just received school bags and stationary supplies for the new school year as part of the UNICEF-supported Back to Learning campaign that will reach one million children. © UNICEF/Syria-2013/Sonoda
Share and raise awareness on #ChildrenofSyria