ZARQA, Jordan, 30 September 2013 — The sound of children singing can just be heard above the steady rumble of traffic. “I wonder if it’s your face that is glowing or the moon above the trees,” they sing. It’s a traditional Arab folk song.

This is Zarqa, a busy and bustling city, just north of Jordan’s capital Amman. It’s made up of Jordanians, Palestinians, Iraqis and now Syrians.

Down a non-descript street is the Family Guidance and Awareness Center. Inside the four storey building vulnerable families can access a range of services, from psychosocial support, to recreational activities for children. 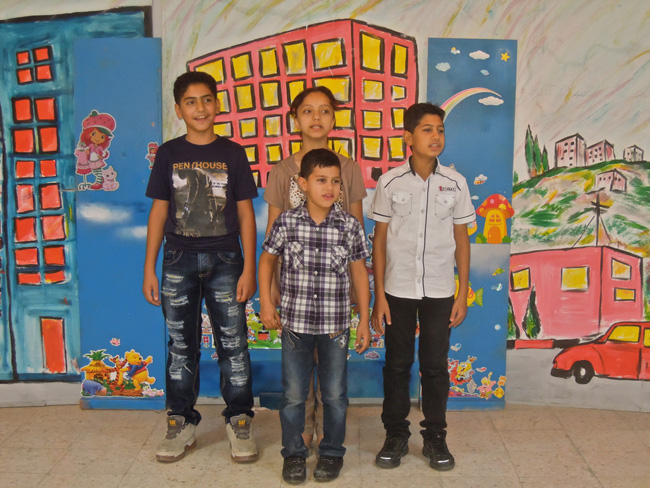 Abdul-Rahman (right) sings with his siblings at the child protective place in Zarqa. ©UNICEF/Jordan-2013/Fricker

On the top floor, eleven year-old Abdul-Rahman, his sister and two brothers are still singing. They arrived in Jordan one year ago after fleeing their home in Damascus, Syria. Since then, they’ve moved four times around Zarqa. The center provides them with some consistency and comfort whilst living in a foreign city.

Today they are singing and drawing with their Jordanian peers who also attend regularly. Mohanad a 24-year old Jordanian is one of the centers ‘animators’. They’ve been trained to work with children who have experienced prolonged periods of stress, such as conflict and displacement.

“At first when children join us they have a bleak outlook. Then we help them to get out of their isolation, integrate with society and make friends inside the center,” said Mohanad.

Abdul-Rahman and his siblings have done just that. They now have friends among the Syrian refugee population and local Jordanians.

According to Mohanad, the long-term benefits of taking part in the activities are clear to see. “They start to talk to us about themselves and their secrets. We can then help to develop their talents,” he said.

There are now 23 ‘family and child protective places’ that follow the same formula as the Zarqa center, with a total of 55 due to open soon. They form one component of UNICEF’s wider psychosocial support strategy for vulnerable children in Jordan and across the region.

Around 70 percent of some 520,000 Syrian refugees live in Jordan’s towns and villages. The centers provide a vital service for vulnerable women and children who can be hard to reach.

The programming is made possible due to funding from the State of Kuwait, the Government of Germany, UK aid and the Italian Corporation.