ERBIL, Iraq 30 September 2013 — Imagine what it’s like to sit idle all day; with trauma behind you, and uncertainty ahead.

Too many children and young people are playing a waiting game in Baherka refugee camp in northern Iraq, wondering what the future holds.

“I stay in the tent like a housewife,” Silva, 20, says sadly. With nothing to do, her days drag.

This was not the life she had planned. Before being forced out of her home by the conflict in Syria she was flourishing in her second year of university. 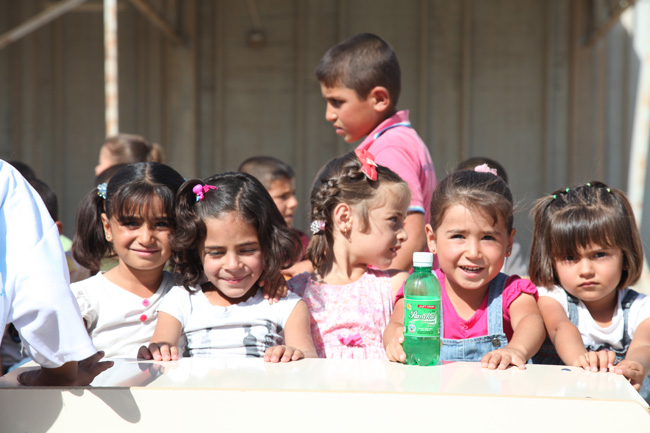 Children celebrate the opening of the UNICEF-supported primary school in Baherka refugee camp in northern Iraq. The school operates in two shifts of three hours every day. ©UNICEF/Iraq-2013/Niles

For her the likelihood of continuing her studies in Iraq is remote, because the annual cost of tuition is thousands of dollars a year—far beyond her reach.

“I hope to go back to Syria to finish my university degree,” she says. “I don’t have any chance to study here.”

Silva’s sister Heba, 13, is in the UNICEF-supported school in Baherka camp.

UNICEF is providing schooling for more than 5,000 children in the Erbil region in grades 1-9. More than 800 children are being educated in Baherka.

The school works in two shifts every day. “It’s very hot,” Heba says. She likes school and hopes to become a doctor.

Silva would like to get a job to help support her family, but she has so far been unsuccessful. So she stays where she is.

The family tent is small. Carpet covers the ground and thin foam mattresses are stacked high along the walls. A small water jug sits in the corner.

As we sit talking, other girls slip in, taking off their shoes and sitting on the floor, some of them cradling younger children.

Kinda, 16, hasn’t been out of school for long. Despite the conflict, she was studying in Syria when her family decided a few weeks ago to escape. In some ways Kinda is lucky. Her father has a job in Duhok, a city about three hours north of Erbil, but she says there isn’t enough money.

“At home I had a lot of books and music,” she said. “But I couldn’t carry them when I came to Iraq.”

Liloz, 12, has a blue exercise book in which she’s spelt out, in English, numbers from one to 20. Liloz wants to continue to study English because of teacher she once knew. “I loved my English teacher. She taught me how to believe in the future.”

Belief in the future seems elusive at the moment. For the younger girls the question is, what happens when primary school ends?

Education, for Syrians, is the key that opens the door to a full life. What if these girls remain on the wrong side of that door?

“Girls are half of society, I tell girls all over the world to study. Education is your ammunition. You can fight your own battles with education,” Silva says.